A Tale of the Marvelous Behavior of a Bodhisattva.

In another lifetime, the Bodhisattva was born as the prince Vishvantara, son of Samjaya, the king of the Shibis. A virtuous prince, Vishvantara possessed a tranquil mind yet was full of energy, was well educated yet free of conceit, and though mighty and celebrated was without a trace of pride. Above all else, Vishvantara was incredibly generous, constantly giving alms to the kingdoms mendicants without question or restraint. He would tour the kingdom's alms halls on a magnificient elephant and provide anybody who asked with whatever they desired. 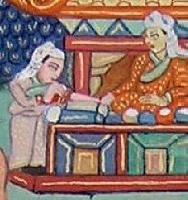 But it came to pass one day that a rival king, clouded with hatred, greed, and jealousy, devised a treacherous scheme to rob the prince of his royal elephant by taking advantage of his charitable nature. The rival king then dispatched a group of brahmans to the land of the Shibis who simply asked the prince for his mighty beast. Overjoyed to receive such a large request, the prince offered the Brahmans the elephant without hesitation even though he was fully aware that he was being tricked.

This act enraged the elders of the Shibi kingdom. They immediately beseeched Vishvantara's father, the great king Samjaya, to banish his son and heir into the forest of the ascetics. They stated that he was only fit for spiritual practice and that by foolishly giving away the royal elephant, he proved that he was not fit to be the heir to the throne. With sadness in his heart, the king agreed, and it was decided that the prince take his wife and two children into the woods and not return. Vishvantara accepted his fathers decision, proceeded to give away his entire treasury to the mendicants, and then began his journey into exhile. 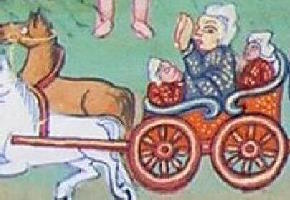 At first, the traveling family had with them a horse drawn chariot but before long, Vishvantara offered the animals to beggars he met along the path. Witnessing that Vishvantara was pulling a heavy chariot on his own, four yakshas disguised themselves as red deer, who like well trained horses, relieved the prince of the heavy physical burden. This was the first of many auspicious signs in the environment during their journey. When they became hungry the trees would bend down and offer them fruit. When thirsty, lotus ponds would spring forth from the earth. When the air would become hot, clouds would form and create a cool breeze. Upon arriving at their destination, the Ascetic Groves of Mount Vanka, they were able to build their hermitage in a lovely location. 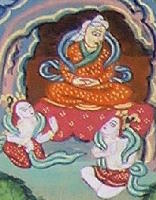 One day however, while the princess had gone to collect food, and the prince had remained at the hermitage with their children, a brahman man approched and requested that Vishvantara give him the children as servants. The Brahman claimed that he needed them to help care for his sick wife. Vishvantara, unable to refuse a request for help, agreed. It caused him great inner turmoil as it was nearly unbearable to see his beloved children cry for their mother while the man aggressively took them away, but he was steadfast in his generosity. When the princess returned and learned of what had happened, the combined grief of the couple was so great that it made the earth shake.

Witnessing this, Shakra, the Lord of Gods, then approached Vishvantara disguising himself as another Brahman and requested that he give him his wife as a servant. Once again, although distraught, the Bodhisattva was unable to refuse. Seeing his infinite generosity and astonishing lack of attachment, Shakra decided to reward him. The first old Brahman, bowing to Shakra's powers, at once led the princess and her children back to the land of the Shibis. When the people of the kingdom heard of the extraordinary compassion of the absent prince, their hearts were softened with tenderness. After redeeming the children from the Brahman and obtaining a pardon, the people of Shibi went on a pilgrimage to the ascetic woods. They found Vishvantara and led him back to the glorious splendor of the royal palace.

2. Tricked by the greedy.

4. Rewarded by the gods.