"...Vajrayogini, on a multi-coloured lotus and sun seat, with the right foot extended pressing down on the breasts of red Kalaratri, left pressing on the backward bent head of black Bhairava. With a body red in colour, brilliant, like the fire at an aeon's end, one face, two hands, three eyes gazing at the pure [realm] of Khechara. The right hand holds a vajra marked curved knife extended downward, left, a blood filled skullcup held above with the face looking upward and drinking. On the left shoulder is a vajra marked katvanga with a damaru [drum], bell and three hanging pendants. Black hair in strands extends to the waist, youthful and with large breasts of desire, in a mood generating bliss. Having a crown of five dry human skulls and a necklace of fifty; naked, adorned with five mudras; Vairochana as a crown; standing in the middle of a blazing fire of pristine awareness." (Nesarwa Ngagwang Kunga Lekpai Jungne, 1704-1761).

At the top center is the primordial Buddha Vajradhara, blue in colour. Seated below is Vira Vajradharma, a form of the primordial buddha Vajradhara, unique to the Vajrayogini system of practice. Red in colour, with one face and two hands he holds aloft a damaru drum in the right and a skullcup held to the heart in the left, with a katvanga staff leaning against the left shoulder, seated in vajra posture. Surrounding those two deities are the human teachers of the Vajrayogini lineage of exposition and practice.

At the bottom center is the special protector for the practitioners of Vajrayogini, Arya Shmashana Adhipati, appearing as two dancing skeletons. To the right are the wealth deities Yellow Jambhala and Black Jambhala.

At the middle left is the deity Chakrasamvara and on the right Green Tara. Below those are the two yoginis belonging to the traditions of the Indian mahasiddhas King Indrabhuti and Maitripa; Indra Kachod and Maitri Kachod. This group of three yoginis, including Naro Kachod, are called 'The Three Red Ones' (Tib.: mar mo kor sum).

Indra Kachod: "...above a lotus, corpse and sun disc is the Holy One with a body red in colour. With two faces, on the right indicating ultimate truth is a black pig face. On the left indicating relative truth is a fierce red face, looking slightly down. The two faces each have three eyes; with some hair hanging loose. The right hand holds a curved knife aloft; the left holds a blood filled skullcup to the heart. On the left shoulder, indicating method, a katvanga is supported. With a naked body and possessing the five bone ornaments; the natural five families as a crown of five dry skulls. The toes of the right foot press on the thigh of the left leg in the manner of a half-posture. The sole of the left foot is placed above the sun - standing in the middle of a blazing fire of pristine awareness. (Ngagwang Chodag, 1572-1641). 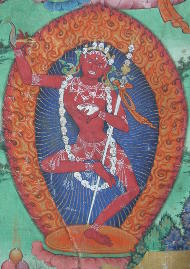 Maitri Kachod: "...she has one face and two hands, red in colour, radiant, smiling, with bared fangs and a slight frown. With three round red eyes she looks upward; with black hair flowing downward. The left hand holds a nectar filled skullcup together with the left leg dangling from the bend of the elbow. In this manner she drinks the nectar from the skullcup. The right hand holds a five-pointed vajra against the heel of the right foot; supported on the right knee. Adorned with various flower garlands and other ornaments she dwells in the middle of the blazing fire of pristine awareness." 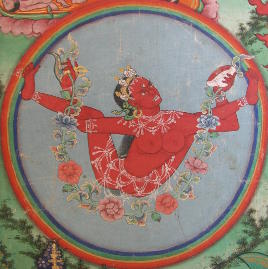 Vajrayogini, is a representation of complete buddhahood in female form. Classified as Wisdom or 'Mother' Anuttarayoga Tantra the practices originate with the Chakrasamvara Cycle of Tantras. Although found in a variety of forms, she is common to all schools of Tibetan Buddhism. In this particular form she is a special teaching passed down from the lineage of the Indian mahasiddha Naropa through to the Sakya School. This form is also popular within the Gelugpa Tradition. At the bottom left corner is Sakya Tridzin with his son at the side. At the bottom right are the two wives of the figures on the left. 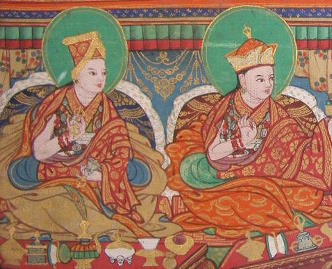 Front of Painting
English Translation of Inscription: No inscriptions on front.