The subject of lineage is one of the most common topics and depictions in Tibetan and Himalayan art. The two most commonly depicted lineage types, in both painting and sculpture, are Teaching & Initiation Lineages followed by Incarnation Lineages. The more famous the lineage the more often it will be found represented in works of art.

In the English language these three words have been used inter-changeably referring to all types of Tibetan and Buddhist subjects. Most often they are used to refer to the three main branches of Buddhism in the Tibetan system which are: Hinayana, Mahayana and Vajrayana. The three terms are again commonly used to refer to what have become known as the Four Schools of Tibetan Buddhism. These four do not really exist as such and there are, of course, many more schools of Tibetan and Himalayan Buddhism than just four. Historically, the phrasing of the 'Four Schools' was created more as a political construct of convenience in the 17th century.

On the Himalayan Art Resources website the two terms 'school' and 'tradition' are generally used in referring to the three main branches of Buddhism: Hinayana, Mahayana and Vajrayana. The two terms are also used inter-changeably for any religious community that maintains more than one teaching or initiation lineage. This applies to all of the Nyingma Traditions, Kadam, Sakya, Marpa Kagyu, Shangpa Kagyu, Jonang, Gelug, etc.

Through English usage the term 'lineage' with regard to Tibetan studies has become by far the more confused of the three words. In Buddhism 'lineage' is a technical word and generally refers to a sequence of teachers and students that have transmitted the Buddhist teachings or initiations in an unbroken line down through the ages to the present. Buddhist lineages can begin with different figures, such as Shakyamuni Buddha, Vajrapani, Manjushri, or others. See the section below for the various lineages in the three main branches, or traditions, of Buddhism.

As for the branches and traditions of Tibetan and Himalayan Buddhism, there are commonly said to be the 'Four Schools' but we all know there are many more than that. What generally constitutes a school or tradition of Buddhism are the coming together of three factors. The first is [1] a self-identity established through celebrity, the passing of time and the accumulation of oral and written history, [2] an administrative structure with leadership and an established hierarchy, and thirdly [3] the maintenance and preservation of more than two Teaching and Initiation lineages, up to hundreds of such lineages. Tibetan Buddhist schools are repositories of thousands of translated Indian texts and hundreds and hundreds of lineages descending from all three main branches of Buddhism. The wealth of Tibetan Buddhist Schools/traditions resides in the preservation of the treasure trove of lineages. 2. Three General Types of Lineage: [1] Teaching & Initiation, [2] Administrative, Institutional & Family, [3] Incarnation.

[1] Teaching & Initiation: generally considered the most important type of lineage in Vajrayana Buddhism this type of lineage requires a continuous unbroken teacher student relationship from the time of Shakyamuni Buddha up to the present. Some lineages can be based on other Buddhas or principal students such as Vajradhara, Vajrapani or Manjushri. Sometimes Tantric lineages can become broken. In the Sarma traditions these broken lineages are very difficult if not impossible to repair. In the Nyingma Tradition broken lineages are easily renewed either through 'pure vision' experiences or the discovery of 'Revealed Treasure' appearing in a timely manner. (See the Teaching & Initiation Lineages Main Page).

[2] Administrative, Institutional & Family: these types of lineages are not dependent on a teacher student relationship and the transmission and continuation of Buddhist teachings in an unbroken line. Administrative and Institutional Lineages, for example, would be the succession of abbots of a particular monastery.

Family Lineages such as the Khon Dungrab, Marpa Chokyi Lodro, Ngogton Choku Dorje, or the many other family traditions of Tibet, only require that the bone line continues. In some families such as the Mindrolling the blood line through the daughters has been maintained. These are administrative, institutional and familial lines that are called lineages but do not require the component of a teaching lineage. Although many families do have special religious and tantric practices passed on from generation to generation. (See a painting set depicting the Khon Family).

Marpa Chokyi Lodro is an example of an early family lineage that died out with the passing of his son Dharmadode. After Milarepa, at the time of Dagpo Lhaje Gampopa, the Marpa Kagyu Tradition adopted monasticism and slowly became became institutionalized, dividing into many sub-schools with no central leadership. From this time period it is known as Dagpo Kagyu. Each of these sub-schools maintained their own special Teaching and Initiation Lineages coming down from Marpa, Milarepa, Rechungpa, Gampopa, and others.

[3] Incarnation Lineages: a series of human teachers believed to be the same entity migrating sequentially and chronologically through time. An example of such an incarnation are the Dalai Lamas of Tibet. The idea of inhabiting a recognizable series of bodies through numerous generations is unique to Tibetan and Himalayan Buddhism. (See the Incarnation Lineages Main Page).3. The Three Buddhist Traditions & Lineages:

Vajrayana: the subject of lineage becomes more complicated in Vajrayana Buddhism. While including the lineage types of the Hinayana and Mahayana, the Vajrayana introduces [1] Tantric Initiation, [2] Teaching and [3] Scriptural Readings (that accompany the specific initiation).

Initiations are also referred to as empowerments and for smaller initiations they are often called Body, Speech & Mind Blessing. There are many different categories of initiations and many different terms in the Tibetan language. Aside from the principal Vajrayana Lineages based on Initiation there are also independent lineages of Teachings and Scriptural Readings for miscellaneous Tantra and Tantric commentaries that don't rely on the immediate prior receiving of an initiation. (See Vajrayana Main Page). 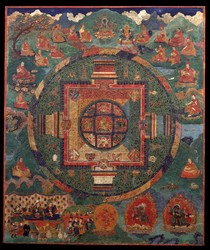 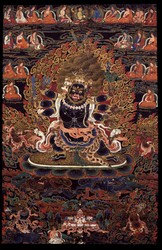 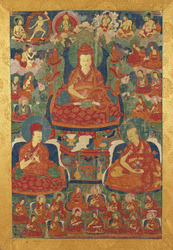 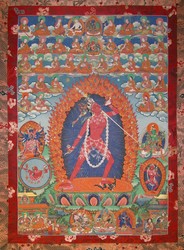 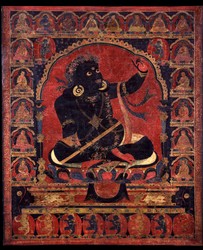