Himalayan and Tibetan Buddhism is generally described as being composed of the three 'Yana' or vehicles of Buddhism - the Hinayana, Mahayana and Vajrayana. In painting and sculpture the Mahayana path is generally represented by either Shakyamuni Buddha or Amitabha Buddha as the central figures surrounded by the Eight Great Bodhisattvas - the realized students. Representing the historical students are the Six Ornaments & Two Excellent Ones of the Southern Continent.

In addition to the two Buddhas mentioned above the future Buddha Maitreya and Bhaishajyaraja Guru (Medicine Buddha) are also representative of Mahayana Buddhism as is the group known as the Thirty-five Confession Buddhas. The Eight Bodhisattvas can also be expanded to include an additional eight making it the group of Sixteen Great Bodhisattvas. Although the sixteen are not so commonly represented in art. In recent times the Six Ornaments and Two Excellent Ones of the Southern Continent have been expanded with nine additional Indian Mahayana scholars making a group of seventeen - known as the Seventeen Great Scholars of Nalanda Monastery. 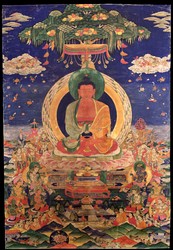 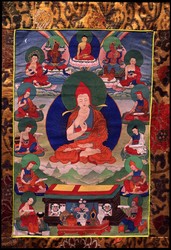 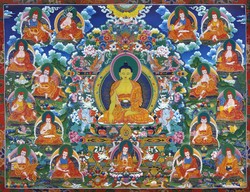 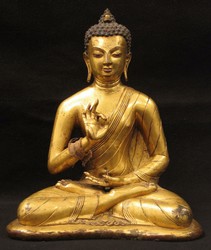 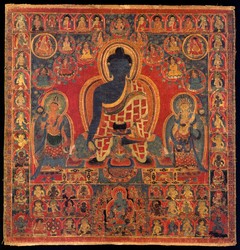 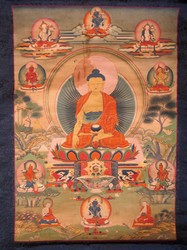