Panjarnata Mahakala, the Great Black One of the Pavilion Tantra:

Panjaranata Mahakala is the special protector for the Shri Hevajra cycle of Tantras. The iconography and rituals are found in the 18th chapter of the Vajra Panjara Tantra (canopy, or pavilion) a Sanskrit language text from India, and an exclusive 'explanatory tantra' to the Hevajra Tantra itself. It is from the name of this Tantra that the specific form of Mahakala is known. 'Vajra Panjara' means the vajra enclosure, egg shaped, created from vajra scepters large and small - all sizes, completely surrounding a Tantric Buddhist mandala. The name of the Tantra is Vajra Panjara and the name of the form of Mahakala taught in this Tantra is also Vajra Panjara. The full name for the protector is Vajra Panjara Nata Mahakala (Vajra Pavilion Lord Great Black One). (See the Panjarnata Mahakala Main Page, Outline Page and Panjarnata Masterworks).

Western scholars, such as Laurence Austine Waddell and Albert Grunwedel, in the 19th and early 20th century believed that the meaning of the Tibetan word 'gur' is this usage meant a 'tent' and that this Mahakala was a special protector of the Tibetan and Mongolian nomads who lived in tents. This academically erroneous belief was however supported by Mongolian folk belief where they believed that Panjara Mahakala, originally introduced to Mongolia by Chogyal Pagpa in the 13th century, was indeed special for them based on the relationship between the famous Tibetan Lama Chogyal Pagpa and the Mongolian Emperor of all of China and Mongolia - Kublai Khan. The image of Panjara Mahakala was also used by Mongolians as a war standard (flag) during the time of Kublai Khan and the duration of the Yuan Dynasty.

The unique iconographic feature of Panjaranata Mahakala as described in the Vajrapanjara Tantra and according to the special Lamdre literature of the Sakya Tradition describes the deity as having no ghandi stick placed horizontally across the forearms. In the other more common Sakya traditions of Panjara Mahakala, such as the Three Deity, Eight Deity, etc., which descend from the tradition of Lotsawa Rinchen Zangpo, then Panjarnata is depicted with the ghandi 'stick of emanation.' There are other exceptions to this ghandi stick rule but they are rare and not commonly found in art - primarily textual exceptions. The two main exceptions are found with the Nagarjuna lineage form of the deity and the Ngog lineage form of Panjarnata Mahakala. 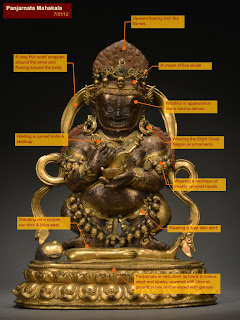 The 'Vajra Pavilion' when represented in mandala paintings or for three-dimensional mandalas is known as the 'Vajra Circle' (Sanskrit: vajravali): inside of the outer ring of a two-dimensional mandala, painting or textile, is a circle of fire and then a vajra circle. This vajra circle is often difficult to see and easy to dismiss as simply decorative. The circle is a series of gold or yellow vajras, painted against a dark blue or black background, lined up end to end and circling around the entire mandala, deity and palace. The vajra circle is not envisioned as flat or horizontal like the lotus circle. The vajras are seen as a three dimensional pavilion, without doors or windows, completely enclosing the mandala. It is made entirely of vajras, small and large with all of the openings filled with ever smaller vajras. It is a three-dimensional structure and impenetrable. Envisioned as a three-dimensional object it is called the Vajra Pavilion.

As with most things related to Tantric Buddhism, there is some confusion regarding the name of this Mahakala. Specifically, the name 'panjara' or 'panjarnata' is referring to deities described in the different chapters of the Vajrapanjara Tantra. Therefore this form of Mahakala is the Vajrapanjara or in brief the Panjara form. However, generally speaking, there are other traditions of this same depiction of Mahakala found in other tantras such as the Twenty-five Chapter Mahakala Tantra and the Fifty Chapter Mahakala Tantra. So, how are we to understand this?

Now it comes down to appearance. If the Mahakala form has one face and two hands, squat, holding a curved knife and skullcup at the heart, and generally (but not always) holding a ghandi stick across the forearms, then it is said both colloquially and in late Tibetan literature that this is named Panjaranata Mahakala, or the panjara form of Mahakala despite the original source text. It is likely that this came about because the Vajrapanjara Tantra and the Hevajra Tantra were so well known as both early Tantric literary works and practice traditions. Because the 'panjara' name was so well known and represented the one face, two armed, form of Mahakala, it is therefore most likely that the name panjara came to be applied to all forms of Mahakala that had this same or similar appearance.

"The Great Vajra Mahakala, blazing, with one face, two hands, in the right a curved knife and left a skullcup filled with blood, held above and below the heart. Held across the middle of the two arms is the 'Gandhi of Emanation;' with three eyes, bared fangs, yellow hair flowing upward, a crown of five dry human skulls and a necklace of fifty fresh, blood-dripping. [He is] adorned with six bone ornaments and snakes, with a lower garment of tiger skin, flowing with pennants and streamers of various silks; dwarfish and thick, in a posture standing above a corpse." (Konchog Lhundrub, 1497-1557).

The general features that describe and define Panjarnata are the single face and two arms. The pair of hands hold a curved knife in the right and a skull cup in the left. Both hands are held to the heart with the right hand slightly above the skull cup. Panjara may or may not also have a 'gandhi' stick across the forearms. His body is short and squat with the legs bowed. He is also described as being a dwarf with short thick arms and legs. He typically stands atop a human corpse having an orange or yellow colour. All of the other characteristics of Panjarnata are identical with the general characteristics of the Mahakala class of deities.