The White Hat of the Karma Kagyu Tradition 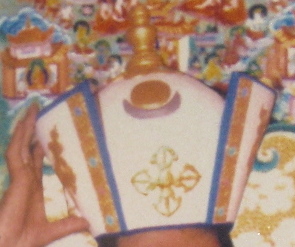 Many have heard of the famous black hat of the Karmapa and the red hat of the Shamarpa, maybe the lotus hat of Padmasambhava and the yellow hat of the Gelugpa Tradition. What about a white hat that is identical to the black hat of Gyalwa Karmapa?

In East Tibet there is a Kagyu Lama named Tsatsa Drubgon Rinpoche. He wears a white hat identical to the Karmapa black hat. This white hat according to the Tibetan biography of Tsatsa Rinpoche is said to have come about as a gift of the 8th Karmapa Mikyo Dorje. In his vision Karmapa saw that Tsatsa Rinpoche had four great characteristics: outer, inner, secret and very secret. The outer characteristic is that Karmapa saw Tsatsa as being very white, of a pure white colour - like the appearance of the goddess of wisdom and learning, Sarasvati. Another of the characteristics was that he embodied the Mahamudra - the highest philosophical view found in the new Tantras from India in the 11th century.

It would seem that it was the outer characteristic that led to the gift of the white hat given by the 8th Karmapa, of the Karma Kagyu Tradition, along with a seal that that has two different styles of lettering. The first with the letters in Tibetan script found in the four corners of the square seal reads Karma pa'i Tsatsa Lama. The central area of the seal in the shape of a cartoche atop a lotus with five visible petals is written in Pagpa'i Script and reads Tsatsa Lama.

Actually it is said that this Tsatasa was one of the principal students of the 7th Karmapa. Prior to that time the earliest documented pre-incarnation was a student of Pagmodrupa and Tstsa followed Pagdru Kagyu Tradition. After the time of the 8th Karmapa the Tsatsa Lamas became more closely assoiciated with the Karma Kagyu Tradition. The name tsatsa of Tsatsa Rinpoche occurred because at one time he spent time making many tsatsa offering molds of all types. When he made water tsatsa they would turn into crystal. After that he was known as Tsatsa Rinpoche.

Tsatsa Monastery is the principal temple in the Lingtsang region of Kham, Tibet (Dege, Sichuan, China). Very close to this location is the birth place of Ling Gesar - within walking distance. Although the region of Lingtsang is now included within the greater Dege region, in the past Lingtsang was the principal kingdom with the Lingtsang Gyalpo as the King of the entire region. At that time the area of Dege was included as Lingtsang territory. In the later history a small portion of Lingtsang land was given to a deserving subject of the Lintsang Kingdom. That portion of land, not considered very good, but considered quite auspicious and imbued with blessing, became known as Dege and again later, as the Dege kingdom with its own King.

In the past there have been eight Tsatsa incarnate Lamas. Recently the 9th was recognized as a small child in the area of Lingtsang, Kham. The 7th Tsata Drubgon lived during the exciting time of Jamyang Khyentse Wangpo and Jamgon Kongtrul in the 19th century. From the time of Kongtrul the 7th and 8th Drubgon have maintained the history, teachings, initiations and special precepts of the Shangpa Kagyu Tradition of Tibetan Buddhism according to the teachings of Jamgon Kongtrul. During tha last half of the 20th century, in India Kalu Rinpoche maintained the Shangpa Tradition and in Tibet Tsatsa Drubgon maintained the Shangpa Kagyu. Today in the region of Lingtsang and Kangdze there are both monasteries and retreat centers following the Shangpa Tradition albeit under the overall supervision of the Karma Kamtsang Tradition to which Jamgon Kongtrul belonged.

It is not presently known if the white hat shown in the image above is believed to be the original white hat or a replacement hat to symbolize the original. Only one painting so far is known to depict a figure wearing a white hat identical to that of Karmapa.