From the visual, artistic and textual records it appears that in the Sakya Tradition the idea of the creation of a generic Field of Accumulation in painting and visual depictions is a new 19th or 20th century concept, possibly following the trend of other religious traditions, such as the Gelug, Karma Kagyu and the Nyingma Longchen Nyingtig Tradition.

There are very few Sakya Refuge Field paintings in any collection anywhere in the world, the east or west. And, of the images of paintings and prints represented below all are from the 20th century.

Each of these images, in one way or another, are depicted on a tree, four of the images are depicted on a five branch tree (four branches and the trunk) and one is depicted (HAR #66295) in the Panchen Lama style on the peak of the tree. Also, only one of the images below (HAR #57025) conforms to the modern orthodox description by Dezhung Rinpoche where the lineage is placed in a circle, on a horizontal plain, surrounding the central form of Vajradhara.

The earliest painting shown here HAR #57025 was likely created in the early to mid 20th century. The White Tara Refuge Field is also 20th century and printed at the the Dege Parkang in Kham, Tibet. The other images are new works and from the last 30 years.

There are two sets of three key points to understanding the symbolism of Field of Accumulation compositions. The two sets belong to the larger and very important subject of Number Sets within Buddhism in general and specifically within Tantric Buddhist iconography. The first set is the Three Jewels: the Buddha, Dharma and Sangha. The second set is the Three Roots: the Guru, Ishtadevata (mandala deva/i) and Dharmapala.

The Three Roots are represented by a deity or historical teacher as the Guru. He is typically depicted at the center of the composition surrounded by lineage teachers. The Ishtadevata, meditational deity (mandala deva), is placed directly below along with other selected deities. The Dharmapala, protectors of the Dharma, are represented principally by Panjarnata Mahakala along with a selection of Beyond Worldly (jnana) and Worldly (loka) protector deities. Sakya compositions do not typically have a section of figures depicting the class of Dakas and Dakinis as often described and depicted with Gelug tradition compositions.

"... a ground entirely of sapphire (vaidurya) gems, shaded blue with bright golden patterns; (in the centre of this is) a lake of nectar beautified by trees and flowers, and emanation birds singing sweet sounds of the Holy Dharma; (above the lake is) a rainbow tent endowed with pleasant odours, a rainfall of various heavenly flowers, wholly complete with all the adornments of a Pure Realm; in its centre is an excellent wish-fulfilling tree, arising from the self-seen Transcendental knowledge, which is adorned with leaves, flowers and fruits. Just by remembering it, one's wishes are rained; upon this is a various coloured four-petalled lotus in the centre of which is a jewelled lion throne, lotus, sun and moon placed upon each other and upon this is one's Root Guru, the combination of all the Buddhas, indistinguishable from Vajradhara, the Master of all the Races, whose body is blue in colour with one face and two hands which hold a vajra and bell crossed at his heart; he is adorned with jewel and bone ornaments and wears various coloured silk garments; his dark blue hair is piled upon his head and the rest hangs beautifully; his two feet are in the vajra-posture, thus (he appears) in the Sambhogakaya form. He is very happy and smiling, and faces towards oneself. Starting from the front are lineage Gurus respectively seated in a clockwise manner, all in the form of Vajradhara. Upon the front petal are the Deities of the four Tantras; upon the right (petal) are all the Buddhas in Nirmanakaya and Sambhogakaya forms; and upon the back (petal) are holy scriptures piled like a mountain; upon the left petal are Bodhisattvas in the householder and renounced forms, inconceivable (in number). In addition (other) Gurus, Deities, Buddhas, and Bodhisattvas, Shravakas, Pratyekabuddhas, Viras, Dakinis, Dharma protectors, Wealth Deities, whoever is a suitable object of refuge, should be imagined as filling the sky like a cluster of clouds. On the ground in front (of this) is seated oneself, one's parents, and sentient beings of the six races in the form of human beings...." 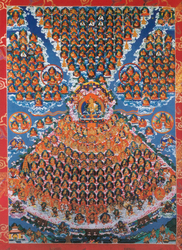 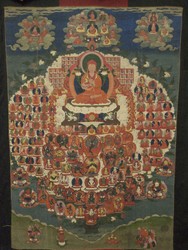 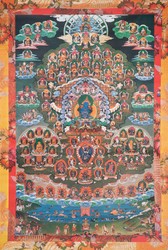 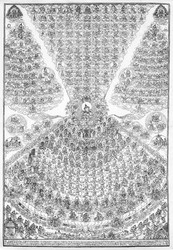 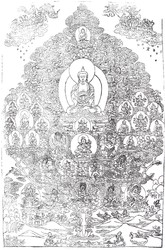 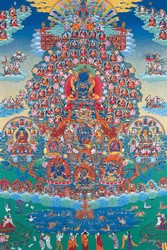