The beautiful Lakshminkara was the sister of the great king Indrabhuti who ruled over the kingdom of Sambola in the land of Oddiyana. She was wise and through listening to the teachings of Lawapa, she became well versed in many tantras. When she was of age, her brother arranged to marry her off to prince Jalandhara, a son of the King of Lankapuri.

Accompanied by a group of friends and attendants, Lakshminkara set out for Lankapuri with a large dowry. When she arrived, she was told to wait outside the palace because it was an inauspicious day. As she waited she looked at the people of the city and became deeply disheartened when she saw that they were not Buddhist. Then, as she thought she could not feel any worse, she saw a hunting party returning to the palace with many dead game animals and was told that the leader of this group was her husband to be. Seeing the numerous animals that had been killed for mere sport, she realized that her future husband was also not a Buddhist. Her heart was broken. She proceeded to give away all of her precious dowry to the poor of Lankapuri. Without any wealth, she took up residence in a cave, covered herself in mud, and began to act crazy. To sustain herself, she would scavenge food that had been discarded or left as offerings in the charnel ground outside of the city of Lankapuri. Despite her appearance, she was inwardly focused on concentration, compassion and the search for truth.

Lakshminkara continued to live in this manner and after seven years achieved a level of realization. She then gave instruction to a lowly toilet cleaner who worked in the royal palace and he also achieved success. No one knew of this mans attainment except for Lakshminkara and he continued to work in the palace as though nothing had changed.

One day, Jalandhara and his court went out on one of their many hunting trips. While deep in the forest, the prince became separated from his servants. He dismounted to rest while his subjects caught up with him. Tired from the hunt, he fell asleep under a tree and awoke several hours later, only to find that no one had yet found him. Needing to find shelter before nightfall, he began searching for a place of refuge and by chance came upon Lakshminkara's cave. Upon entering, he was surprised to find Lakshminkara radiating light and being adored by an uncountable retinue of goddesses. This beautiful sight deeply effected Jalandhara who then began making regular visits to the cave. Despite his visits, Lakshminkara remained skeptical of his presence and eventually inquired as to his motives. He affirmed his faith in the Buddha and requested teachings from her. She taught him only one single verse of profound spiritual meaning and said that she was not his teacher. She informed him that his teacher is one of his very own toilet cleaners in the palace.

When Jalandhara returned home to the palace, he found the servant that would be his teacher and brought him to his chambers. Paying respect and requesting teachings, the servant that cleaned the toilets for the prince agreed and gave Jalandhara the initiation into the Transference of Consciousness and the practices of the Generation and Perfection Stage Yogas of the meditational deity Vajravarahi.

Both Lakshminkara and the toilet cleaner lived and taught for many years in the city of Lankapuri and performed countless miracles before they each departed in their physical bodies for the pureland of Khechara. 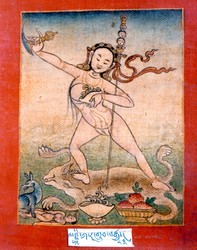