The Three Lords of the World (Bodhisattva):
Manjushri, Avalokiteshvara and Vajrapani.

"... [for the mandala] the east is white, south blue, west red, north green and middle yellow. ... At the center is Arya Manjushri, the colour of fresh saffron, one face and two hands. The right [hand] holds aloft a wisdom sword. The left [hand] holds an utpala supporting the text of the Prajnaparamita. With the hair tied up in five tufts, [he] is seated in vajra posture.

In the north is Guhyapati [Vajrapani], blue, the right [hand] holds a vajra to the heart and the left a bell supported at the hip, seated in sattva posture." (Gyu de kun tu, volume 1, pages 64-65).

Note that the Three Lords: Manjushri, Avalokiteshvara and Vajrapani are not protector deities. In many non-Tibetan publications it is common to see the Three Lords mistakenly referred to as Protectors. The confusion is based on the Tibetan word 'gonpo' meaning 'lord' which is also used as a term for the class of Mahakala deities and others. The confusion also arises from Tibetan and Himalayan folk culture where a cairn is located at the entrance to a village and referred to as the shrine of the 'Gonpo Sum' - Three Lords (protectors). The village shrines most likely predate Buddhism and were originally unrelated to the Three Lords of Tantric Buddhism. 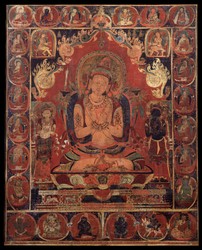 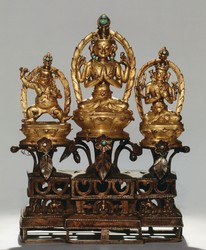 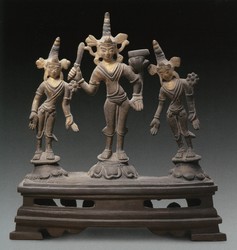 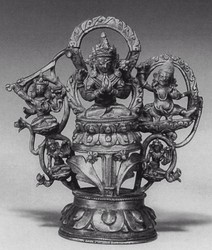 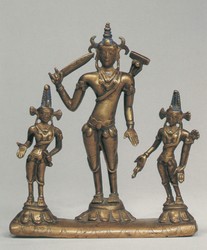 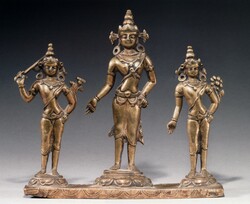 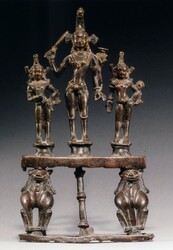 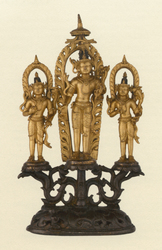 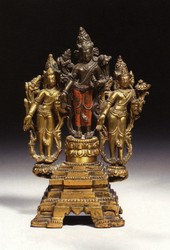 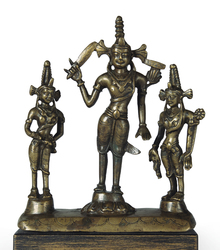