Yeshe Walmo: a healing deity and a protector, an emanation of Sherab Chamma and Sipai Gyalmo, principal female protector deity in the Bon Religion.

Yeshe Walmo has one face and two hands, blue black in colour, wrathful in appearance. In the upraised right hand she holds a flaming sword. The left hand holds a skullcup to the heart. Wearing bone ornaments and heavenly garments she stands on the left leg with the right drawn up atop a prone figure, sun disc and lotus seat, surrounded by the flames of wisdom fire. 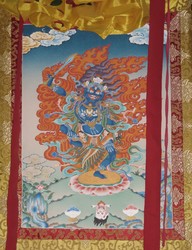 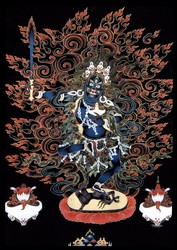