Guru Dragtro is male with one face and two hands, wrathful, blue in colour. He holds a vajra scepter in the right hand and skullcup in the left, standing atop a nine headed sow. There are three wrathful attendant deities, Krodha Vajrapani, Krodha Manjushri and Hayagriva. Each of these is accompanied by a garuda bird. Four additional garuda birds accompany Dragtro.

Dragtro appears to be based on the wrathful form of Padmasambhava known as Guru Dragpo. The principal mantra for Dragtro and for Guru Dragpo are essentially the same. The deity Dragtro belongs to the 'Treasure Tradition' of Rolpai Dorje a 17th century Terton (treasure revealer) from Eastern Tibet.

The practice of Dragtro in the 20th century has become strongly associated with the Dorje Gotrab (vajra armour) practice of the 'Treasure Revealer' Tulku Dorje Lingpa (1346-1405). The original Dorje Gotrab practice of Dorje Lingpa does not include any deities or generation stage practice. The teaching was based on the mere recitation of a mantra formula without dependence on visualized forms.

There are no pre-20th century examples of an iconographic deity figure of Dorje Gotrab, sometimes known as Padma Shavari, two words included as part of the mantra. During the 20th century a number of paintings in an almost identical appearance to Dragtro are claimed to be depictions of Dorje Gotrab. The primary differences are the attribute in the left hand and the wings on the back. Dragtro holds a skullcup while the claimed Dorje Gotrab holds a peg (purba) in the new compositions. Dragtro unfurls a set of wings while Gotrab has no wings. A secondary difference is a lack of attendant figures for Gotrab as found in the original Dragtro text of Rolpai Dorje.

Some 20th century teachers have included a deity visualization to the Dorje Gotrab practice such as Dudjom Rinpoche Jigdral Yeshe Dorje (1904-1987) adding Krodha Vajrapani as a self-generation. 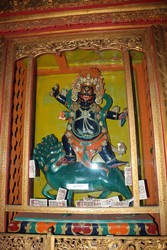 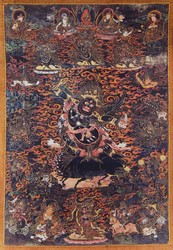 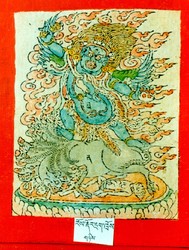