Nechung Chogyang, is a title, the 'Religious Protector of Nechung (small place)' Monastery. His proper name is Dorje Dragden. In English he is commonly referred to as the Nechung Oracle. Dorje Dragden is the chief minister in the retinue of Pehar Gyalpo a worldly deity (god, spirit) appointed as a protector of Buddhism. According to legend Pehar, originally from the north western region of Bata Hor, was subjugated by Padmasambhava in the 8th century. The official Nechung Monastery is located just below the large Drepung Monastery on the west side of Lhasa, Tibet, China. Nechung Chogyong is the principal oracle for the Ganden Podrang government and the Dalai Lamas since the time of the Great 5th Dalai Lama, Ngagwang Lobzang Gyatso (1617-1682).

According to Tibetan religious history Pehar Gyalpo was originally appointed as the defender and protector of Samye Monastery and re-appointed in the 17th century by the 5th Dalai Lama to the Nechung Monastery in Lhasa area. Pehar is a non-Tibetan spirit who is believed to have been subjugated by Guru Rinpoche Padmasambhava and bound by an oath to protect all the Buddhist temples and monasteries of Tibet. Other stories relate how Pehar was a local protector in the northern regions of Bata-Hor, conquered by Tri Songtsen Gampo, and brought back to Tibet hidden in the horde of plundered wealth. This group of five Pehar figures, originally belonging to the Nyingma 'Revealed Treasure' Tradition, was later incorporated into the Gelugpa School at the time of the 5th Dalai Lama, and can be found in other Tibetan Buddhist schools depending on the preferences of individual monasteries. Some traditions claim that, like the Direction King Vaishravana, Pehar Gyalpo Ku Nga has attained the 10th level Bodhisattva ground - a Mahayana level of attainment - immediately preceding the full enlightenment of a Buddha. 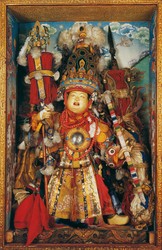 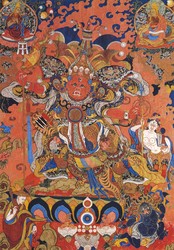 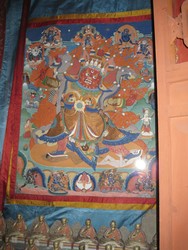 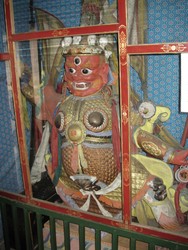 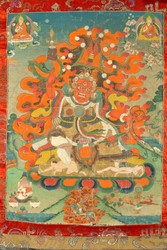 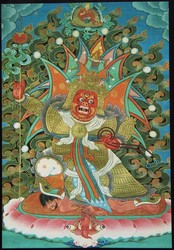 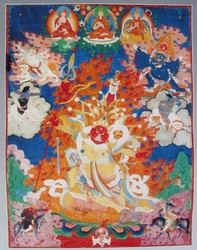