The Svarodaya Manuscript is of Shaiva origin thought to originate in Kashmir over a millennium ago. It is essentially a book of magic and tied very closely to astrology and the astrological magic of India. The subject of the text is also sometimes referred to as martial magic because of its origin in relation to a battle between the God Realm and the Asura Realm. The great Indian God Shiva is credited with the creation of the Svarodaya manuscript. The source of the text is a dialogue between Shiva and Shakti.

Many of the approximately 130 magical and astrological practices in the manuscript relate to marriage, harvest, child birth, and the many other normal and typical subjects associated with Indian magic.

The manuscript entered the Tibetan Buddhist world via Jumla in West Nepal and brought to Tibet where it was popularized among some family lineage groups. The text enjoyed a much greater popularity at the time of Desi Sanggye Gyatso in the 17th century. The subject of the Svarodaya was included in the monumental work of the Vaidurya Karpo (White Beryl) treatise on Tibetan astrology.

An early block print text of the Svarodaya from the 17th century contains many of the magical images - in the text they are called chakras. Several hand written manuscripts with some drawings included amongst the pages are also known to exist (see example). Two separate and unique large scrolls depicting all of the images of the Svarodaya have been identified along with a fully illuminated folio text with a drawing style very closely related to the Svarodaya scroll on the HAR website.

See the detail images of the hand written manuscript.

See the detail images of the 15 foot scroll. 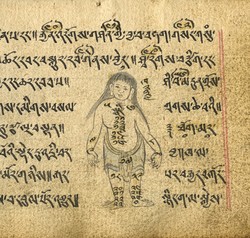 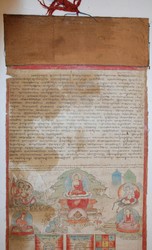