Tagtsang (taktsang) in Bhutan is the most famous of the thirteen Tagtsang's throughout the Himalayas and Tibet. For the purpose of subduing daemons and spirits of Tibet and the surrounding Himalayan regions Padmasambhava, at the thirteen mountain retreats each known as the Tiger's Den (Tagtsang), appeared as the very wrathful Dorje Drolo. At many of these locations Guru Rinpoche left impressions of his feet in the rocks. Dorje Drolo belongs to the group known as the Eight Manifestations of Padmasambhava which arises from the Nyingma tradition of the Revealed Treasures (Tib.: ter ma).

Jeff Watt 3-2012Taktsang (site name: Paro Taktsang; location: Paro District). Taktsang (stag tshang) is one of the major pilgrimage sites of Bhutan, and a series of temples and meditation retreats make up the complex. It is said that in the eighth century, Guru Rinpoche arrived in Paro and flew up to the cliff-side site upon the back of a tigress, a manifestation of his consort Yeshe Tsogyal. In 1692, the fourth Druk Desi ('brug sde srid) Tenzin Rabgye (brstan 'dzin rab rgyas, 1638-1696; r. 1680-1695) built an extended temple structure around the cave site where Guru is thought to have meditated, known as Sengge Damdrup (seng+ge bsam grub). Today, this cave holds a set of phurbu (ritual daggers) that are shown to the public on one day each year. Other major temples at the complex include a shrine to a speaking statue of Guru Rinpoche, the chorten of Langchen Pelgyi Sengge, Tsepagme Lhakhang, Marmed Dagsum Lhakhang, Drolo Lhakhang and additional shrines. Outside the temple complex proper are additional sacred sites, including a meditation place of Yeshe Tsogyal, the temples of Ugyen Tsemo (o rgyan rtse mo) and Zangdog Pelri (zangs mdog dpal ri), the birthplace of the 69th Je Khenpo Gedun Rinchen (dge 'dun rin chen, 1926-1997), and Machig Phug (ma gchig phug), a temple and cave dedicated to the 11th century Tibetan master Machig Labdron (ma gcig lab sgron). Over the centuries, myriad Buddhist masters from all traditions visited, meditated at or withdrew treasures (gter ma) from Taktsang, including Milarepa and Thangtong Gyalpo. In 1951, Taktsang caught fire when a villager was clearing land in the valley below, yet was not a total loss. Then in April of 1998, Taktsang suffered a catastrophic fire that caused the loss of wall paintings, temples and artifacts. After a long reconstruction process, Taktsang was re-consecrated in March of 2005. 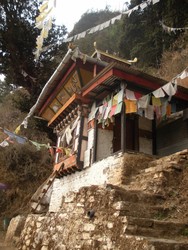 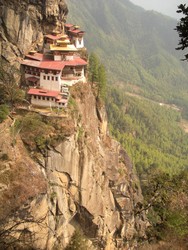 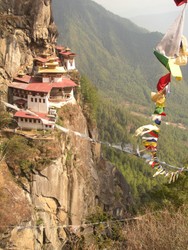 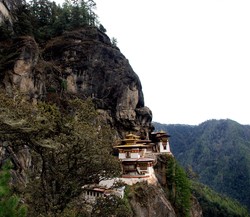 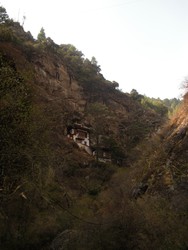 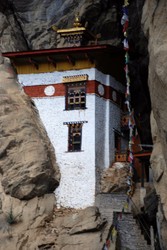