- Assembly Hall, Dukang ('du khang): the main building of a monastery where monks congregate for large group prayer recitations, services, rituals and teachings. This hall is usually the central location of a monastery and often contains the main shrine. An assembly hall almost always contains a shrine. The words Dukang, Tsogkang, Tsogchen, and Tsug Lhakang are almost identical in meaning.

- Assembly Hall or Temple, Tsogkang (tshogs khang): with this term the emphasis is placed on the 'assembly.' The Tsogkang and Dukang are almost identical in definition and function.

- College, Shedra (bshad grwa): a college teaches classical Buddhist subjects from an established curriculum. Sometimes there is a Mahayana college and a Vajrayana college for teaching Tantric subjects. Large monasteries can have several colleges depending on tradition, the subjects taught, and number of students.

- Confession Temple, Tungshag Lhakang (ltung bshags lha khang): a hall dedicated to the recitation of the Sutra of Confession and used for the monthly confession assembly for monks and nuns. Only very large monasteries will have a dedicated building and temple for all of the various religious and secular functions that are carried out.

- Debate Ground/field: the outside courtyard area used for gatherings of monks to practice formal debate with a single or multiple partners.

- Library, Pendzo Khang (dpe mdzod lha khang): the building or dedicated space in a monastery for the storing of religious books. The library can be either a room on an upper floor of a building or a separate building entirely. There are generally two principal locations for the storage of books. The first location is behind the main shrine of a monastery or temple. The second location is the dedicated library.

- Monastic College, Shedra (bshad grwa): a college and a monastic college mean the same thing in a monastery. Large monasteries can have several colleges depending on tradition, the subjects taught, and number of students. Sometimes they even have a Tantric College.

- Monastic House, Khangtsan (khang tshan): a house within a larger monastery where the monks are divided according to region and district.

- Monastic Household, Labrang (bla brang): a Labrang functions either as a family tradition (hereditary titles, land and property), a corporation, or the administrative body that serves an incarnate Lama and inherited property, such as for the Dalai Lama, Panchen Lama, Karmapa, etc.

- Monk's Quarters, Drashag (grwa shag): the individual living quarters for the resident monks of a monastery.

- Naga House, Lhukang (klu khang): a small structure often only a few feet square that is raised up and serves as a shrine for the local serpent spirits (naga, lhu). The most famous Lhukang Temple is situated behind the Potala Palace in Lhasa. It was built to placate the serpents after the completion of the construction of the Potala.

- Palace/Mansion, Podrang (pho brang): the term Palace implies the residence or institution of a very old or prestigious hereditary family line, or an incarnation line of Buddhist teachers. The most famous are the Ganden Podrang of Drepung monastery which later became the government of Tibet under the 5th Dalai Lama. In the Sakya Tradition there are the two Palaces, the Drolma Podrang and the Puntsog Podrang.

- Prayer Hall, Monlam Lhakang (smon lam spyi khang): almost identical to the general assembly hall. In very large monasteries with many buildings then a Prayer Hall would be designated for specific types of ritual functions.

- Principal Monastic College/main temple, Tsug Lhakang (gtsug lag khang): referring to a main or principal temple. Tere are several famous Tsuglhakang temples such as the famous Jokhang in Lhasa, the Tsug Lhakang in Sakya and likewise the Tsug Lhakang at Palkor Chode Monastery in Gyantse. Generally when the term Tsug Lhakang is used to refer to a temple it implies the most most important, the biggest, or the administratively dominant temple in a region or within a religious tradition.

- Printing House, or Great Printing House, Parkhang or Parkhang Chenmo (dpar khang chen mo): the building used for storing carved wood printing blocks for imprinting Tibetan paper with texts of all kinds (history, ritual, philosophy) for the main monastery and subsidiary branch monasteries. A few of the most famous Printing Houses were at Nartang, Tshol, Dege and Labrang.

- Protector Shrine, Sungma Khang (srung ma khang): either a separate room within a larger building or a separate building for conducting the rituals and offerings to the protector deities.

- Protector Temple, Gonkhang (mgon khang): the room or dedicated building for performing the offering rituals to the protector deities of Vajrayana Buddhism. A small monastery would have a room for this function where as a larger monastery could have a principal building as the Protector Temple along with many small temples dedicated to specific protector deities. For example, in Samye Monastery the main Protector Shrine is located on the ground floor of the Tsug Lhakang (Main Temple). Within the Samye precincts and off to the side is a large two story building dedicated to the protector Tsi'u Marpo. With several Buddhist Traditions a general rule to follow is to worship the Wisdom Protector Deities inside the main temple and to make offerings to the Worldly Protector Deities outside of the Main Temple. Sometimes the Worldly Deities (i.e. mountain gods, regional gods, nagas, ghosts) outside of the formal monastery precincts.

- Regional Divisions/sections in a great monastery, Dratsang (grwa tshang): a Dratsang is a single building or a complex of building within a monastery. The term can also refer to monastic quarters for all of those monks coming from a particular regional area in Tibet or the Himalayan regions.

- Ritual Hall (zhabs brtan lha khang): a designated assembly hall where monks or nuns conduct specific rituals at the request of patrons and donors acting on behalf of themselves, along with sick or deceased family members.

- Seat, Principal Religious or Administrative Center (gdan sa): a founding monastery is sometimes referred to as the 'seat' meaning the administrative center for a Tibetan Buddhist Tradition. Examples are Sakya Dansa in Sakya Town and Dansa Til of Pagmodrubpa Dorje Gyalpo.

- Shrine: a space in a home or temple where sacred objects representing the articles of faith, of Buddhism or Bon, are displayed as the central focus. below that various offerings such as bowls of water, food and precious objects are arranged.

- Shrine room/chapel, Chokang (mchod khang): generally a sacred space where offerings are made to symbolic representations of the Three j\Jewels of Buddhism. Shrines can be located in large monastery temples or in small private homes.

- Stupa with One Thousand Images, Kumbum (mchod rten, sku 'bum): a building designed in the shape of a Buddhist stupa and having chapels that house over one thousand religious images of deities. The most famous are the Gyantse Stupa, Jonang Monastery, Riwoche Monastery and Kumbum Monastery.

- Tantric College, Ngagpa Dratsang (sngags pa graw tshang): a college specifically for training in the higher subjects of the Tantra texts. A Tantric College is a school for studying Tantra which is different from a Tantric Hall where rituals are studied and performed.

- Temple/chapel/shrine hall (lha khang): the Lhakang is the 'room' or 'house of the Gods'. The name implies that it is a room devoted to the deities. There is very little difference between a Chokang and a Lhakang.

- Tsan House, Tsan khang (btsan khang): a small shrine similar in size and appearance to the Naga House but intended for the 'tsan' spirits that occupy many of the regions of Tibet.

- Vajra Seat, Dorje Den, Vajrasana (rdo rje gdan): this term specifically refers to the 'vajrasana' of Shakyamuni Buddha - the place where the historical Buddha reached full and complete enlightenment in Bodhgaya, India, under the bodhi tree. A number of religious traditions in Tibet also claim to be a 'dorje den' such as Sakya Town claiming to be the Vajrasana of Tibet. Other traditions and locations also make the same claim.

- Grass Hut, Chilpo (spyil po): the grass hut was popular with Kushali practitioners of India and also made famous by Pagmodrubpa Dorje Gyalpo at the location of Densatil, Tibet. (Example 1).

- Hermitage, Ritro (ri khrod): a hermitage is a place for quiet meditation and study. In Tibet this often means a mountain retreat, out of the way, and isolated.

- Hermitage, quiet place, Wensa (dben gnas): Wensa is another word for a quiet meditation space away from society and constant busyness.

- Meditation Cave, Drub Pug (sgrub phug): caves are a very traditional Buddhist location for doing prolonged and intensive meditation. Some caves are natural and formed from solid rock. These are more common to Central and East Tibet. Other caves are carved from conglomerate layers of stone and earth such as those commonly found in West Tibet (Ngari and Mustang). (Example 1).

- Meditation Center/house, Drubkang (sgrub khang): the Tibetan words are 'house of accomplishment' but the meaning is a building or complex of buildings that function as a center for the instruction and practice of prolonged meditation. A Drubkang can also imply a retreat center for the practice of meditation for an undetermined length of time. A Drubkang can be associated with a larger institution or function as an independent religious establishment.

- Mountain Cave, Ripug (ri phug): a mountain cave has the same meaning as a meditation cave. A 'ripug' can be a simple unadorned cave, rock over-hanging or hollow on the side of a hill. Many historical caves have been turned into large architectural buildings with the original cave located deep in the structure. Shalu Ripug and Kau Dragdzong are examples of caves that have been turned into retreat centers. Milarepa, Lingrepa and others are famous for spending much of their lives meditating in mountain caves.

- Retreat Center/college, Drub Dra (sgrub grwa): a 'center for accomplishment' is often more formal and attached to a monastery or college of a larger monastery. They often have programs with scheduled courses of instruction followed by retreats of a three year three month duration, six years, nine years, or twelve years.

- Retreat Hut, Tsam Kang (mtshams khang): a small house, or grass hut, intended for a single practitioner of meditation. A number of Tsam Kang can be located at the same place creating a retreat or meditation center. 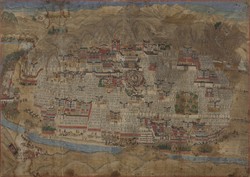 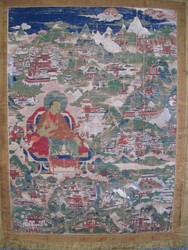