(See The Lhukang, A Hidden Temple in Tibet by Ian Baker).

On the 3rd floor of the Lhukang Temple there are seven murals - painted wall surfaces. There are three large mural panels and four small mural panels. Two of the large panels document [1 & 2] 'Revealed Treasure' Teachings of Pema Lingpa. These two panels are very detailed and are accompanied by written inscriptions and sequential numbering.

A third large panel depicts the [3] Eighty-four Mahasiddhas of the Vajrasana tradition along with the Twenty-five disciples of Padmasambhava.

Of the three small narrow panels, the first of these depicts various narratives scenes including [4] Pema Lingpa and the discovery of 'Revealed Treasures' in a lake in Bhutan. The second small panel again depicts [5] narrative scenes including Sakya Pandita, Tsongkapa, Tsarchen Loasal Gyatso and Doringpa (see images below). The third of the three panels depicts [6] two deities - a Nyingma Heruka figure above and a wrathful Vajrapani below. The fourth small panel appears to be a continuation of the second large panel of Pema Lingpa. (The images below are courtesy of (c) Hamid Sardar). 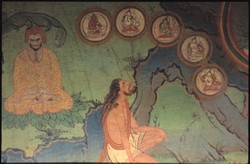 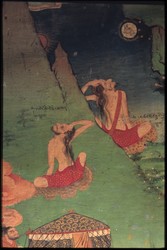 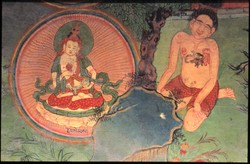 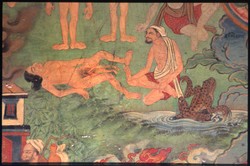 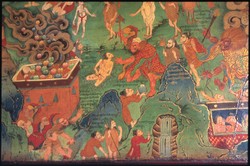 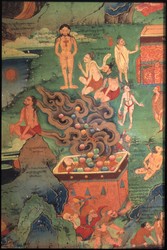 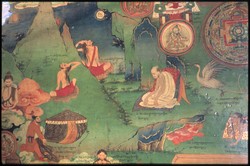 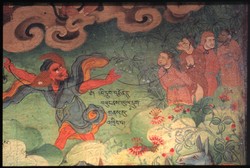 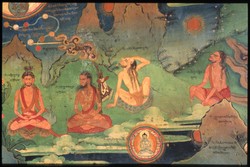 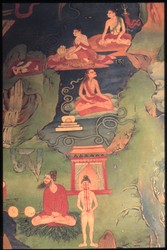 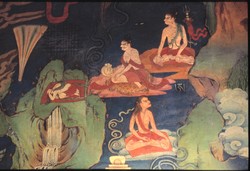 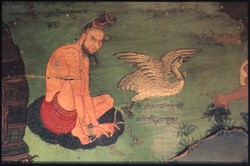