The Kadam Style Stupa is characterized by a typical but rather simply decorated top with a parasol and thirteen descending discs below. The center is adorned by a square balcony-like structure with a round bell shaped bottom below with all of that placed atop a round double lotus base.

The most distinctive or unique feature is the round bell shaped bottom. A common belief is that the Kadam stupa was introduced to Tibet by Atisha and the Kadam Tradition. It is far more likely that the Kadampa stupa is based on the eighth and final of the Eight Great Stupas symbolizing eight great events in the life of Shakyamuni Buddha. That final stupa represents the parinirvana of Shakyamuni. It is possible that over time this very streamlined and easily held stupa shape became commonly associated with the 'mandala offering ritual' where the stupa represents the mind of the 'guru' and Buddha.

Most Kadama stupas are between eight and ten inches tall and function as a ritual object on a shrine or during the elaborate ritual of mandala offering common to large religious events in Tibetan, Himalayan and Mongolian Buddhist culture. There are however some larger Kadam Stupas such as these two examples: HAR #64904 and #65213. 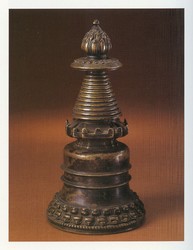 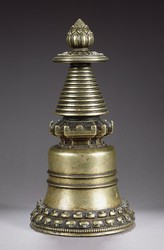 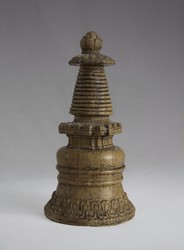