Ngari Panchen Pema Wangyal (1487-1542 [P1699]) was a teacher originating from Mustang. He principally practised the Nyingma and Sakya Traditions. He popularised the cult of the Buddhist protector deity Tsiu Marpo likely an adaptation of the local Bon mountain protector special for the town of Lo Monthang called Tsengo Dragpa Gyaltsen. The mountain is located due west of the Mustang capital and Dragpa Gyaltsen remains to this day the special protector deity to the Mustang royal family. The principal 'Terma' Revealed Treasure cycle of Ngari Panchen is known as the Ngarpan Terdzo.

Pema Wanggyel received lay and bodhisattva vows from his father at the age of eight after which he commenced his formal studies. His father gave him the transmissions from all the classes of Nyingma tantra, particularly the Sutra that Gathers All Intentions (dgongs pa 'dus pa'i mdo), the Guhyagarbha Tantra, and the "Mind Class" (sems sde) section of the Dzogchen teachings. He studied the Vinaya, sutras, and cycles of Kadampa teachings with a teacher named Norten Zangpo (nor bstan bzang po, d.u.), and is said that to have mastered over one hundred textual traditions by the time he was twenty, foremost among them Madhyamaka, logic and Prajñaparamita, earning him the title "Panchen," a Tibetan rendering of the Indic Mahapandita, great scholar.

He began a retreat on Red Yamantaka at the age of twenty-one, which he had received from several teachers including Jamyang Chokyong ('jam dbyangs chos skyong, d.u.), and Domtson Tsultrim Pel (sdom brtson tshul khrims dpal, d.u.). When he was twenty-two, he received transmissions for the spoken word (bka' ma) and treasure (gter ma) traditions of the Nyingma school from his father. At the age of twenty-three he received Lamdre (lam 'bras) teachings from a Sakya teacher named Lowo Lotsawa Sherab Rinchen (glo bo lo tsa bA shes rab rin chen, d.u.) twice.

He took complete ordination at the age of twenty-five from another Sakya master, Lowo Khenhen Sonam Lhundrub (bsod nams lhun grub, 1441/1456-1525/1532) at a monastery called Samdrub Ling (bsam 'grub gling). His observance of the monastic precepts was such that he is remembered as one of the foremost upholders of the monastic vows during his time. He continued to study grammar, logic, and the tantras of the new translations traditions with Namgyel Pelzang (rnam rgyal dpal bzang, d.u.) of Guge (gu ge) and Jamyang Lodro Pelgon ('jam dbyangs blo gros dpal mgon, d.u.).

Afterwards, he embarked on an extensive pilgrimage to holy places around Tibet accompanied by his brother, Lekden Dorje. They received numerous transmissions from the Jangter tradition from Shakya Zangpo (shAkya bzang po, d.u.), posthumously known as the First Yolmo Tulku (yol mo sprul sku 01), then continued on to the Kathmandu valley where they studied under many Tibetan and Newari teachers living there. He once again entered retreat, during which it is said he experienced many visions of Padmasambhava and was able to recall his previous life as Tibetan emperor Tri Songdetsen (khri srong lde'u btsan, 755-797).

According to biographical sources, at the age of thirty-eight Pema Wanggyel began to teach widely. Obtaining blessings from his father and permission from the officials in his hometown, he again travelled to central Tibet with his brother in order to restore doctrinal traditions that, according to his hagiography, had deteriorated there. Travelling through Zangzang Lhadrak (zang zang lha brag), the birthplace of Rigdzin Godemchen, the originator of the Jangter cycle, they visited the Jokhang in Lhasa and then continued on to Zhung Treuzhing (gzhung spre'u zhing) where he received the cycles of the Ngok ma??alas (rngog dkyil) and Red Yamari from Ngokton Sonam Tendzin (rngog bsod nams bstan 'dzin, d.u.) and Zhalu Lochen Chokyong Zangpo (zhA lu lo chen chos skyong bzang po) of Dratang Monastery (grA thang dgon).

Ngari Panchen and Lekden Dorje then proceeded to Samye Monastery where they stayed for seven days in a nomadic tent performing rituals that included an extensive land blessing ceremony. During the course of their stay they established a small community of tantric practitioners named Evam Chokgar (e waM lcog sgar). This community was later enlarged by Pema Wanggyel's reincarnation, Jangdak Tashi Tobgyel (byang bdag bkra shis stobs rgyal, c.1550-1603), and then moved and reestablished as a monastery on the north bank of the Tsangpo River by Rigdzin Ngakgi Wangpo (rig 'dzin ngag gi dbang po, 1580-1639) who was both Jangdak Tashi Tobgyel’s son and Lekden Dorje's incarnation. The monastery was named Tubten Dorje Drak Evam Chokgar (thub bstan rdo rje brag e waM chog sgar) or simply Dorje Drak, rising to prominence as one of the six "mother monasteries" of the Nyingma tradition in Tibet.

Pema Wanggyel practiced meditation at the caves of Drak Yangdzong (brag yang rdzong) and Chimpu (mchims phu), then traveled to Lhodrak (lho brag) on the invitation of a descendent of the treasure revealer Guru Chowang (gu ru chos dbang, 1212-1270). One of Pema Wanggyel's main practices during this time was the Gathering of All the Sugatas (bde gshegs 'dus pa), which encompassed the eight main wrathful deities of the Nyingma school. He is reported to have received this empowerment a total of twenty-five times, the last time from Namkhai Neljor (nam mkha'i rnal 'byor, d.u.) at Lhodrak, an ancestral lineage holder of King Tri Songdetsen who held an unbroken tradition of this practice. Afterwards Pema Wanggyel entered a solitary retreat.

He began to reveal treasures of his own at the age of forty-six. It is said he discovered his most famous treasure cycle, the Condensed Essence of the Vidhyadhara (rig 'dzin yongs 'dus), lodged in the back of an image of Vairocana featuring four bodies facing the four directions (rnam snang mi bzhi) in the upper hall at Samye monastery. He then invited the seventeenth abbot of Drigung Monastery, Rinchen Puntsok Chokyi Gyelpo (rin chen phun tshogs chos kyi rgyal po, 1509-1557), who he had been introduced to by his brother Lekden Dorje, to participate in an extensive re-consecration ceremony of Samye.

Ngari Panchen Pema Wanggyel passed away in Mustang at the age of fifty-six. Legend has it that after his death, an orb of light was witnessed ascending into the sky by many of those who had attended the funeral.

A prolific author, one of his most famous works, Ascertaining the Three Vows (sdom gsum rnam par nges pa), a treatise on the Pratimoksha, Bodhisattva, and Tantric vows from the Nyingma perspective, is still used in many Nyingma curriculum today and has been translated into English. His subsequent incarnation, Jangdak Tashi Tobgyel (byang bdag bkra shis stobs rgyal, 1550-1603), was also engaged in promoting the Jangter tradition throughout Tibet.

(Harry Einhorn works at the Rubin Museum of Art and is a composer and performer whose pieces have been performed in New York and elsewhere. Published May 2013). 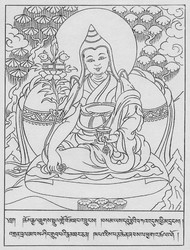