The images below are all of the meditational deity Hevajra. They are also painted in the Khyenri Style. One of the paintings is more often described as being in a Palpung Monastery Style, HAR #77074. This painting has been included to show how the Palpung style, developed by Situ Panchen Chokyi Jungne (1700-1774), incorporated and continued the Khyenri traditional painting style for figures. It is especially with the depictions of the figures of teachers and deities that the Khyenri style excels. (See a comparison of Khyenri and Palpung style painting for the deity Kalachakra).

Some of the more obvious characteristics are the bright colours along with the perfect or almost perfect circles of flame or halos around the figures, both primary and secondary. Many of the hands, especially with Hevajra, exhibit different gestures, similar ornamentation and treatment of the animal skins on the body, curly orange hair on the top of the head and the same facial expressions especially with the side faces. Many of these similarities can also be found with other deities such as Kalachakra and Yogambara in a Vajravali painting set. (See other examples of the Khyenri style of painting). 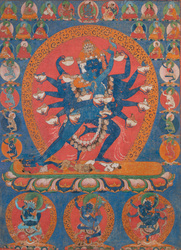 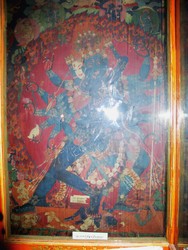 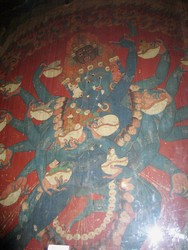 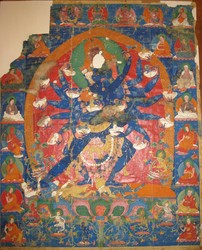 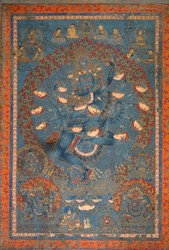 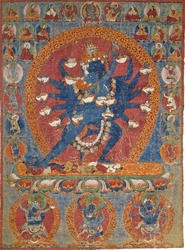 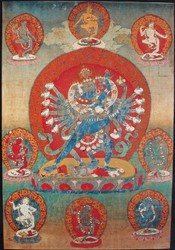