Staves come in many shapes and sizes but by definition a staff should be large by comparison to a human-like figure. In Foundational Buddhism, the first known staff is the kakkara held by monks when walking and traveling, constantly jingling with the movements of metal rings, with the sound meant to warn woodland creatures of the approaching mendicant shramanera. These staves have basically only a single type that only changes and modifies with cultural exchange. In Mahayana Buddhism the staff remains the same, simply a required object in the possession of an ordained monk.

In Vajrayana Buddhism the staff takes on many new forms and functions. For Tantric practitioners emulating the behaviour of the major meditational deities such as Hevajra and Chakrasamvara the staff is called a katvanga. The katvanga is primarily an attribute for deities that are in semi-peaceful semi-wrathful appearance, not for peaceful deities and only sometimes for wrathful deities. For male and female meditational deities in simple solitary aspect such as Hevajra, Chakrasamvara, Nairatmya or Vajrayogini, the katvanga staff represents the consort. The katvanga staff is described in the Tantric literature in great detail and contains many deep meanings locked in the mnemonic symbolism.

Padmasambhava and Tsang Nyon Heruka are both famous for supporting a katvanga staff against the left shoulder. Indian teachers, siddhas and mahasiddhas are not generally associated with the katvanga in painting or sculpture - only Padmasambhava.

Many male and female deities cradle a staff in the bend of the elbow, some hold the katvanga in the hand while embracing a consort. Often the staff with all of the prescribed detail, symbols and design, represents the full mandala of the container and the contained, deities, palace, ground, pavilion and pristine awareness fire.

A wooden object similar to a staff from the tradition of Foundational Buddhism, known as a 'gandi', used to call monks to prayer, has been appropriated by several forms of the wisdom protector Mahakala. Most noteworthy is Panjarnata Mahakala who holds the 'gandi' staff horizontally across both forearms. From the example of Panjarnata numerous other forms of Mahakala adopt the attribute of the 'gandi' staff held in a variety of manner.

The relatively plain appearing 'gandi' begins to take on more characteristics and tantric symbolism. The first new symbolism is the appearance of two doors, often red in colour, representing the doors from which all other forms of Mahakala emanate from. When held vertically the bottom of the staff often takes on the shape of a three-sided peg (kila). A half-vajra scepter decoration adorns the top. Three heads in various stages of decomposition can also adorn the upper staff below the vajra finial.

Confusion in identification can arise between staves and pegs (kilas) when the staff has a peg bottom or a peg is of a very long length equalling that of a typical staff. Other objects can also stir confusion with regard to the peg such as the large double sided drum with a long wooden support handle that is often decorated with a peg bottom or point. Almost all shaman drums of the Himalayas are also adorned with a peg handle. Kakkara, katvanga and gandi, with or without a peg bottom, are the typical types of staves depicted in Himalayan art. 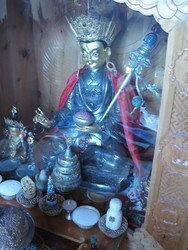 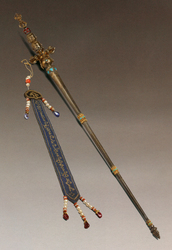