General Meaning of the Term Vajra: Vajra (Sanskrit: vajra. Tibetan Wylie: rdo rje. The two Tibetan conjunct words used to translate vajra into Tibetan are 'do' and 'je' (pronounced dorje). The word 'do' means stone or rock and 'je' means best or highest - the best stone: [1] from the Indian Vedic literature, the scepter of the god Indra, a god of thunder and war, namely a lightning bolt or lightning bolt scepter hurled from the hand, intended as a weapon. [2] from the Indian Puranic literature, a weapon made from the bones of a sage (rishi), and [3] a word, represented by the physical symbolic scepter, that has come to represent Tantric Buddhism, also known as Vajrayana (Vajra Vehicle, Path of the Vajra).

Buddhist Meanings of the Term Vajra: The term vajra is found in early Pali style Buddhism and the later Mahayana Buddhism. In Vajrayana it is most commonly known as the vajra ritual scepter and matching bell. In Mahayana the term vajra relates to states of meditation known as samadhi along with bodhisattva practices such as are described in the Vajracchedika Sutra. In Buddhism as a whole vajra refers to (1) a geographic location - Vajrasana, (2) a body posture - vajra asana, and to a (3) concentrated mental state - vajra samadhi.

Vajra as a Prefix: in the Vajrayana Buddhism of the Himalayas and Tibet the term vajra (Tibetan: dorje) is commonly attached to the names of subjugated local deities, mountain gods or anything of the sort that is not of Indian Tantric origin. Examples are the worldly Tibetan deities Dorje Setrab, Dorje Legpa, Dorje Yudronma, Dorje Shugden and others.

The Object - Vajra Scepter: As a Buddhist scepter in Vajrayana Buddhism it is a small object, generally made of metal, having five or nine prongs at each end that bend inward to form a rounded enclosure. When the vajra scepter is held in the upraised right hand of the deity Vajrapani, in wrathful form, the vajra is understood to be a weapon, like a lightening bolt in the hands of Zeus and Indra, or the club of Heracles - the divine hero of Greek Mythology. It is a throwing weapon intended to stun the victim who is the target after which they are bound with the vajra lasso that is held in the left hand of Vajrapani. As a physical ritual object the vajra is almost always accompanied by a bell with a half vajra handle (Sanskrit: ghanta). Numerous other ritual objects, potentially all, can be marked with the vajra or more commonly the half-vajra. For example see the vajra hammer with a half vajra adornment. Vajras are also found with Buddhists of South-east Asia, particularly Java, and with the Shingon Buddhists of Japan.

Types of Vajra Scepters & General Symbolism: The nine pronged configuration is the vajra most commonly used by the Nyingma Tradition of Tibetan and Himalayan Buddhism. The five pronged configuration is the vajra used by the new schools, or Sarma Traditions: Sakya, Kagyu, Jonang, Gelug, etc. A one pronged vajra is related to naga rituals. A vajra with five prongs having the tines or tips open and not touching the central prong is a 'wrathful' five prong vajra. Vajras with faces adorning the center are thought to be created in the Tangut Kingdom of North China. Vajras with dragon prongs of nine or more, some over a hundred are of Chinese origin. Vishvavajras with twenty prongs represent activity.

Vajra Gesture (mudra): There are several hand gestures in Tantric Buddhism named 'vajra mudra' however they rarely occur in visual depictions such as painting and sculpture except for early depictions of Vairochana Buddha. There are some yoga techniques also using the word 'vajra' but again rarely if ever depicted in art.

Vajra Posture (asana): a Buddhist term referring to a seated position where the feet are placed sole up on the thigh of the opposite leg; right over left. In the West this posture is almost universally referred to as the lotus posture because of the popularity of Hatha Yoga and terminology used in the major Hindu traditions - subjects generally more familiar to a Western audience. The location of the Buddha's enlightenment in India, now called Bodhgaya, is called Vajrasana in Buddhist literature. The posture the Buddha sat in while reaching enlightenment is the vajra posture, and the highest meditation (samadhi) that is accomplished on reaching Buddhahood, in this vajra location and seated in vajra posture, is vajra samadhi. (See Postures in Iconography).

Tantric Deities & the Vajra Scepter: the principal deities associated with the vajra are Vajradhara, Vajrapani, Vajrasattva, Hevajra, Vajravidarana, and Vajrakila. There are many other deity forms that hold the vajra as a hand attribute amongst many other objects but in those cases the vajra is not a principal symbol that helps to define that deity. See Ushnishavijaya who holds a vishvavajra and Yellow Parnashavari.

Vajra Circle (vajravali) & Vajra Ground: also known as the ground of a mandala and the surrounding Vajra Pavilion. The ground of a two-dimensional painted mandala is symbolized by the large double vajra (vishva-vajra) with the prongs extending above and around the four gates at the four cardinal directions.

Inside of the outer ring of a two-dimensional mandala, painting or textile, is a circle of fire and then a vajra circle. This vajra circle is often difficult to see and easy to dismiss as simply decorative. The circle is a series of gold or yellow vajras, painted against a dark blue or black background, lined up end to end and circling around the entire mandala, deity and palace. The vajra circle is not envisioned as flat or horizontal like the lotus circle. The vajras are seen as a three dimensional pavilion, without doors or windows, completely enclosing the mandala. It is made entirely of vajras, small and large with all of the openings filled with ever smaller vajras. It is a three-dimensional structure and impenetrable. It is also called the Vajra Pavilion or the Outer Protection Chakra of a Mandala. (See Yama Dharmaraja example 1 and example 2, Chakrasamvara example and Hevajra example). 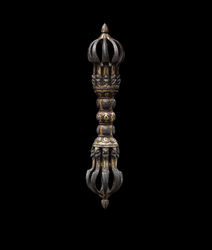 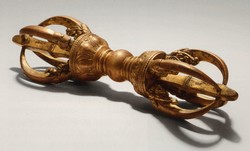 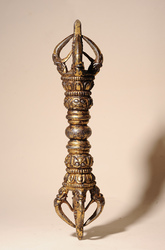 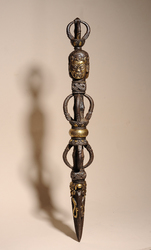 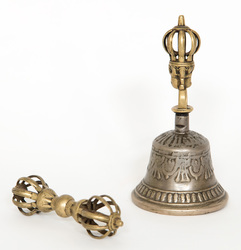 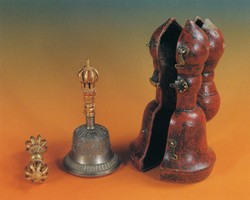