The vajra scepter and the bell with a vajra handle are two of the three principal religious objects of Vajrayana Buddhism. The third ritual object is the mala, prayer beads. Another name for Vajrayana is Mantrayana. Mantras are verbal formulas or prayers recited and counted using a mala of varying and specific numbers of beads.

The symbolism of the bell with a vajra handle represents: (1) the Five Symbolic Buddhas, (2) Eight Bodhisattvas, (3) Prajnaparamita and consort, and (4) Eight Goddesses. The five prongs are the buddhas. The lotus petals below (which are not always represented) are the Eight Bodhisattvas. The peaceful face is that of Prajnaparamita. The ring of Tibetan or Sanskrit letters at the top of the bell shape are the Eight Goddesses. 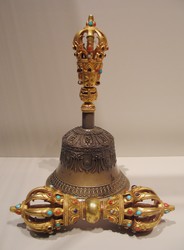 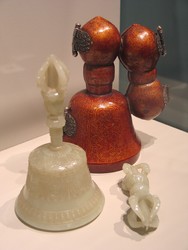 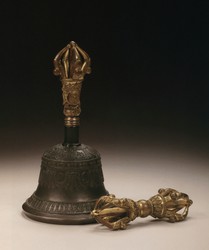