There are several types of objects that are created to represent offerings in Himalayan and Tibetan art. They can first be divided by medium: sculpture, painting and textile - applique and embroidery. Most of these objects are created as sets making it important to be aware of the Number Sets associated with offering objects.

The various mediums for sculpture can be almost anything that can render an object in three dimensions. Metal, clay, wood or stone are the most common materials. The subject of Offering Objects, both three dimensional and two dimensional, are generally either peaceful or wrathful in appearance and purpose. Sculptural objects are most often peaceful in appearance and function. The sculptural offerings have several common subject types: [1] human figures, [2] animals figures, [3] symbol sets and [4] mandala plates. It is possible to add another category which might include permanent 'torma', long-life vases and other ritual objects that are created to be placed on a shrine and seen rather than to be used in the hands for actual ritual performance.

Painting and textile are only divided by medium and technique, otherwise the subjects and uses are the same for both. There are three styles of physical format: portrait, landscape and banner. The banners are very long horizontal scrolls intended to hang in temples. The portrait and landscape format styles are generally more iconographic while the banners are more decorative with repeating designs and motifs (see an example of a banner).

Of the two main subject types, peaceful and wrathful, the Peaceful Offerings are generally found painted, as murals or hanging scrolls, and displayed in the main temples of monasteries and institutions. The Wrathful Offering paintings, known as kangdze (bskang rdzas), are hung in the smaller protector chapels of monasteries. Wrathful Offering paintings are generally only done for Protector Deities.

Wrathful Offering paintings are quite common and can be found in many collections worldwide. They are either painted or made of textile embroideries or applique. Many of the painted compositions are done on a black surface and known as Black Ground Painting. A special characteristic of kangdze paintings and textiles are the depiction of the ornaments and hand attributes of individual wrathful deities. The attributes arranged in a particular pattern or sequence is recognizable as representing a specific figure such as a form of Mahakala or a specific form of Shri Devi. Vaishravana is one of the easiest deities to identify because he holds a Victory Banner and a mongoose while riding a lion. There are very few protector deities that ride lions making it very easy to spot the lion and immediately associate it with Vaishravana. The various compositions for Wrathful Offerings can be divided into several principal subjects and types. 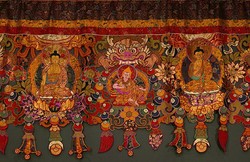 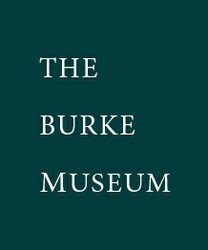 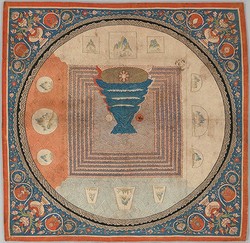 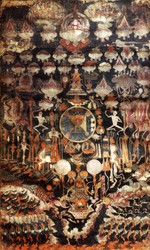 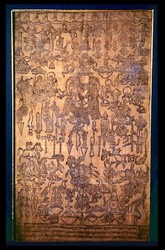 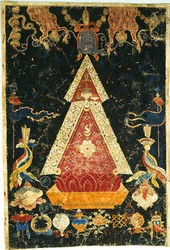 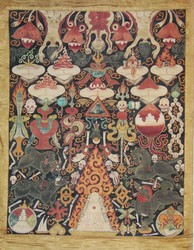