One Doubt About the Ocean of Sadhanas
by Tsangwang Gendun Tenpa

I have been puzzled over one question for quite some time now, that is, who was the author or the editor of sgrub thabs rgya mtsho (the Ocean of Sadhanas)? I once read in sangs rgyas chos gzhung gi tshig mdzod (the Buddhist Text Dictionary), that this book was composed by Atisha. I believed in this statement and would tell others the same.

“… a more elaborate one could be found in the sgrub thabs kun las btus or sgyub thabs rgya mtshor grags pa. It was edited by a bha yA ka ra [Abhayakara] and included more than 240 sections…” (1)

This had made me question the remark on Atisha being the author of the sgrub thabs rgya mtsho.

Some texts on the study of Buddhist origin claim the Ocean of Sadhanas was written by someone named Pandita dpal ‘dzin sde [Shri Dharasena]. I was completely baffled by reading this. Since then, I was in utter hesitation concerning the author or the editor of the Ocean of Sadhanas.

A few days earlier, I was reading the section on the sgrub thabs rgya mtsho in the bstan ‘gyur dpe bsdur ma (The Collated Tengyur). I noticed that in the colophon, the great translator grags pa rgyal mtshan [Dragpa Gyaltsen] was attributed as the translator of lha so so’i sgrub thabs rgya mtsho. It also further explains that the editor was Pandita a bha ya, [Abhayakara] and the translators were Pandita kirti tsan dra [Kirtichandra] as well as the translator from Yarlung, grags pa rgyal mtshan [Dragpa Gyaltsen, (1242-1346, P2637)].

In addition, It is clearly stated in the bstan ‘gyur dpe bsdur ma that the sgrub thabs rgya mtsho'i kha skong or lhan thabs (Appendix of the Ocean of Sadhanas), was re-translated by Jonang kun dga' snying po [Kunga Nyingpo]. Also, other translated or edited versions were indexed under this text.

In fact, in regard to the editor of The Ocean of Sadhanas, Taranatha had written nothing other than: “It seems sgrub thabs thams cad that was edited in the time of a bha ya ka ra [Abhayakara] contains more sadhanas than the one listed in dpal ‘dzin sde’s [Shrisena] catalogue.” In the list of its transmission lineage(s), it merely claims that the linage starts with a bha ya [Abhayakara]. It is not clear whether dpal ‘dzin sde [Shri Dharasena] was a part of the lineage. Therefore, it is arguable as to whether either dpal ‘dzin sde or a bha ya [Shri Dharasena or Abhayakara] was the first one who edited the text.

All sadhanas that were transmitted through Atisha are referred to as snar thang brgya rtsa [Nartang Gyatsa] rather than sgrub thabs rgya mtsho. Thus, what was written in sangs rgyas chos gzhung gi tshig mdzod must be inaccurate.

(Translated by Tenzin Yangkar, Lhasa, 11-2018. Images and formatting have been added by HAR Staff). 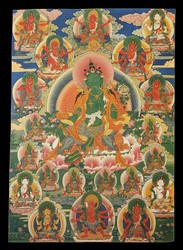