"In the special, noble, Vajra Vehicle [Vajrayana], among the numerous four tantras [kriya, charya, yoga and anuttara] this protector is of the Anuttarayoga. Of those, from the three [classes], Method, Wisdom and Non-dual, this is Method Tantra. From the three famous Father Tantras of the Yamari Cycle, Rakta [Red], Krishna [Black], and Bhairava [Terrifying], this is the uncommon protector of the Vajrabhairava." (Ngor Ponlop Ngagwang Legdrub, 19th century).

Care must be taken not to confuse and conflate the many Indian Vaishnava myths from the Kurma and Markandeya Puranas, and others, of Yama and his twin sister Yami. In the Puranic traditions Yama is the king of the ghosts (preta) and presides over the judgments of hell. In this role he is the same as the Buddhist judge of beings migrating to the hells. The sister Yami plays no role in any Buddhist narratives or rituals concerning the protector deity Yama Dharmaraja whose consort is named Chamundi.

Yama associated with the Hell realms, commonly depicted as the central figure in the Hell scenes of Buddhist paintings of the Wheel of Life (Samsara Chakra, Bhavana Chakra), and this Yama Dharmaraja of the Vajrabhairava Tantra are not the same entity, being or individual. The first, Yama, is conceived of as a sentient creature and the King of the Ghost Realm (preta), arising from the Buddhist Abhidharma literature based on a Theravadin and Sutrayana model of the world/universe. The second is based exclusively on the Vajrabhairava Root Tantra where the deity Manjushri assumes a variety of terrifying (Skt. bhairava) forms to metaphorically subdue Yama (death, a synonym for the endless suffering of cyclic existence) and uses the theme of death as a metaphor for an entire cycle of Tantric practice which is the Vajrabhairava, Krishna Yamari and Rakta Yamari cycle (collection) of Tantras.

The words Yama, Yamari, Yamantaka, Bhairava and Vajrabhairava appear frequently in all classes of tantric texts and they can refer to an attendant deity, a protector, or as a worldly god beneath the feet of a Buddhist meditational deity (Skt. ishtadevata) such as Vajrayogini, or Chakrasamvara. In those instances Bhairava represents the various negative emotions to be conquered through meditation. Keeping in mind the similarities in name and form it is important not to confuse the various names, identities, deities and especially the Buddhist Tantric models and systems that each belongs and to properly understand each in its own place. 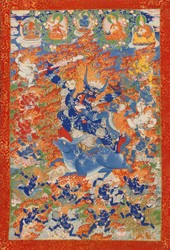 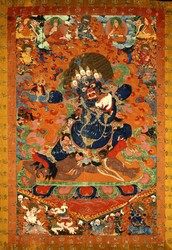 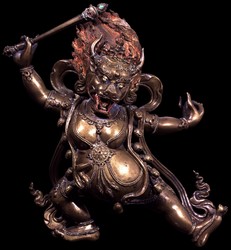