Nampar Gyalwa can have several different ways of appearing in art. Typically he is either blue, or green in colour, peaceful in appearance with one face and two arms. The right hand is generally raised to the side above the level of the shoulder with the hand flat and the palm facing forward as if in a saluting gesture. The left hand is typically resting with the heel of the palm on the knee and the fingers extended and slightly raised. He sits in a crossed leg posture atop a flower blossom and throne in front of a palace complex within a walled courtyard.

The painted compositions of Nampar Gyalwa are often formulaic and predictable. The four monastic sons of Tonpa Shenrab stand to the right and left sides of the throne. At the top center the Four Transcendent Lords are often depicted. Four wrathful deities are arranged either in a row or in the four corners of the composition. They are: Zowo Ugu, Zema Ugu, Rocho Degu and Hrompo Tsegu. They are each wrathful in appearance, blue in colour, with nine heads and eighteen arms, in a standing posture surrounded by flames. In the upper half of the composition are two Naga Kings: Lugyal Tsugna Rinchen (yellow) and Lugyal Jogpo (blue). Also in the upper composition are two gods: Lhawang Gyajin (white) and Dopa Gugyur (yellow). The nagas and gods, depending on the size of the composition, may or may not have surrounding retinue figures (twelve each). Beneath the throne is the Chinese King Kongtse with retinue. At the bottom center is the 'Word Protector' Kasrung Lhachen Chenlha Miggu. He is maroon in colour, wrathful with three faces and six arms, riding a boar with nine heads, accompanied by four retinue figures, each with a different animal face. Four other figures are often included: Sangwa Lhagchen, Yizhin Gyalwa, Tangzang Ringkye and Khala Obar.

The story of Tonpa Shenrab as Nampar Gyalwa (Tibetan: rnam par rgyal ba) is described in detail in chapter 50 of the Ziji, a twelve volume, 61 chapter biography of Tonpa Shenrab. The essential story concerns a Chinese king named Kongtse Trulkyi Gyalpo who attempted to build a temple on the great ocean west of Olmo Lungring. His intention was to acquire merit for the next life. The king told no one except the spirits and daemons of the ocean. Due to a misunderstanding between the King, his wife and the spirits and demons, the daemons destroyed the half built temple. Deeply upset the King prayed to Tonpa Shenrab who then appeared in the form of Complete Victory (Nampar Gyalwa), blue in colour with an angry expression, one face and two hands. The right hand is held up in the gesture of Complete Victory and the left placed on the knee. Behind Tonpa was a special fierce throne back (Tib.: gyab yol) with a lion at the bottom eating a human figure and a dragon above eating a naga serpent spirit, a sea monster above that, and topped with a Horned Eagle. Tonpa also emanated four wrathful multi-headed deities each standing in the four directions. The daemons were defeated and the temple was completed and named the White-black Shimmering Temple (Tib.: gsas khang dkar nag bkra gsal). The chief of the daemons became the protector and the temple became a library for the teachings of Tonpa Shenrab.

'The Bon Religion of Tibet:' The Iconography of a Living Tradition. Per Kvaerne. Serindia Publications. London 1995. 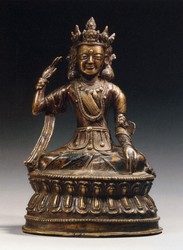 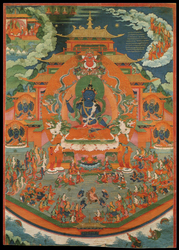 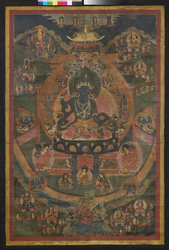 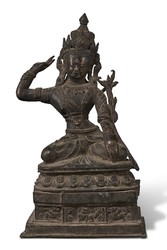 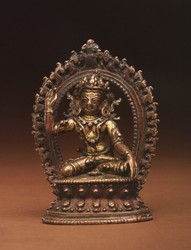 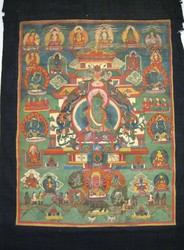 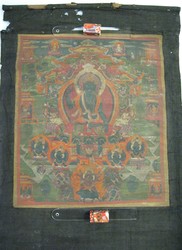 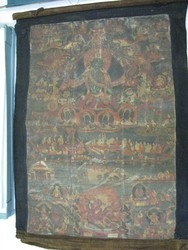 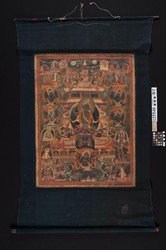 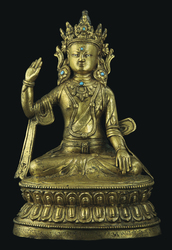 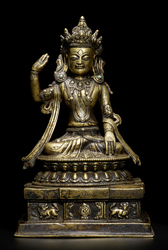 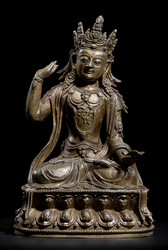