Typically, buddha figures face forward toward the viewer. Only in narrative depictions do they look to the right or left. They have an ushnisha, cranial bump, on the top of the head further marked with a gold ornament. There is a white dot between the eyebrows - not always white - representing a single coiled white hair. There are three slightly curved horizontal lines, one above the other, under the neck. A buddha has elongated pierced earlobes. A buddha also wears the patchwork robes of a fully ordained monk. He sits in the vajra posture with the right leg over the left, soles of the feet facing upward. Buddha figures are typically seated in either vajra posture or with the legs extended forward in a Western style. The latter pose can be found with both Shakyamuni Buddha and Maitreya. Figures with 'Buddha Appearance' can have a variety of different body colours. Shakyamuni Buddha is generally described as golden in colour. Amitabha Buddha is red. Medicine Buddha appears blue in colour. 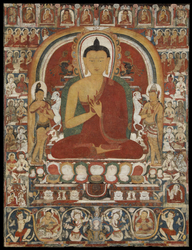 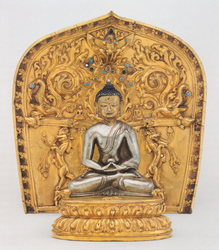 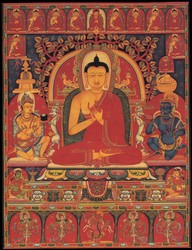