The general depiction of Gesar is of a Tibetan warrior, atop a horse, clad in armor and a helmet with elaborate flag pennants and streamers, accompanied by eight horseman upto thirty horsemen. Gesar is also commonly depicted with thirteen animals surrounding him. These are the 'Werma Chu Sum' - thirteen special attendant figures - animals.

This general description of Gesar Norbu Dradul is almost identical to that of any typical Drala (or Dra lha, 'Enemy God'). Drala Appearance is one of eleven principal appearance types in Tibetan iconography. It is very easy to confuse the two subjects of Gesar and other Drala figures such as the Drala Chegu since Gesar appears to be so entirely related to the subject of the Drala and Werma. Also look at another similar figure (HAR #73433) which is not yet identified. (See the Drala Appearance Outline Page and a Gesar-Drala Comparison Page). 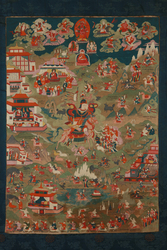 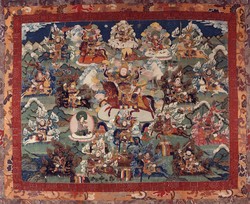 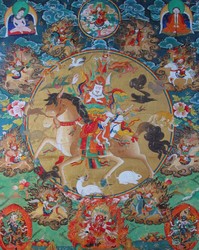