From these masters Lachog Sengge received Vajrakīlaya and Yamāntaka [Vajrabhairava] empowerments, Lamdre instructions, as well as many other teachings. In general, many great teachers and yogis gave him instructions in different aspects of Buddhist teachings and ascetic practices. Biographical accounts indicate that his learning was vast. Due to his skills in practice and the fine quality of his mind he became widely known as an excellent practitioner. When he had accomplished a high level of study and practice from various great teachers, he began to teach at Chudu Norbuling (chu 'dus nor bu gling, possibly another name for mnyes thang rwa ba stod) and Ngor monastery.

Before passing away in 1489, Gorampa made several predictions about Lachog Sengge's future. He also established Muchen Sanggye Rinchen in his own monastic residence and ensured that in time he would be enthroned as abbot. After Gorampa passed away and his remains were cremated, it was said that there was a rain of flowers which Lachog Sengge gathered and put in a vase. He performed all the appropriate rites such as fire pujas, consecration and so forth. He took some of the master's bones to Tubten Dargye Ling monastery (thub bstan dar rgyas gling) in present-day Mustang and passed on Gorampa's teachings to the abbot there. He returned to Ngor and took over Muchen Sanggye Rinchen's previous residence, preparing to eventually become abbot himself.

Lhachog Sengge ascended to the abbot's throne of Ngor in 1516, serving for eighteen years as the ninth abbot, until the year before his death in 1534. In the course of his career Lachog Sengge did a great deal to develop and spread the Ngor tradition. He commissioned countless paintings, and is remembered as a great patron of the arts. His main students were Namkha Palzang (nam mkha' dpal bzang, 1532-1602), the thirteenth abbot of Ngor; Konchog Lhundrub (dkon mchog lhun grub, 1497-1557), the tenth abbot of Ngor; Sanggye Sengge (sangs rgyas seng ge, 1504-1569), the eleventh abbot of Ngor; and Deleg Shenyen (dge legs bshes gnyen, d.u.).

[Extracted from the Treasury of Lives, Tibetan Lineages website. Edited and formatted for inclusion on the Himalayan Art Resources website. October, 2012].

Teacher and Patron of the Arts: The paintings below belong to various sets of paintings all commissioned by the famous 9th abbot of Ngor Monastery, Lhachog Sengge (1468-1535) [biographical information, TBRC P2509]. 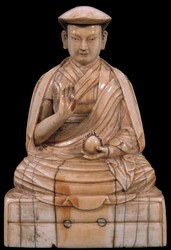