The key iconographic elements that are used to identify a figure of Avalokiteshvara are the large round [1] flower blossom, or lotus, held by the stem and opening over the left shoulder, a [2] small figure of Amitabha Buddha on the crown of the head, and [3] a krishnasara deerskin worn across the left shoulder. Sometimes Lokeshvara holds a water pot or a string of beads (mala) but these along with the deerskin are also shared attributes with the bodhisattva Maitreya and not conclusive on their own in identification. In a very few instances posture can be a contributing indicator along with the above mentioned attributes in identifying a sculptural figure of Lokeshvara.

The four general types of Lokeshvara non-iconic appearance described below are based on artistic and regional choices and convention. The four general posture types are not described or stipulated in iconographic literature. Artists have a tremendous amount of liberty in depicting the postures and movement of characters from the sutra literature of Mahayana Buddhism.

There are four principal types of non-iconic Lokeshvara. The first three are easily identifiable. The first is the [1] standing figure commonly known as Padmapani.

The second is a [2] seated figure in a relaxed posture with a knee raised up. This form can sometimes be confused with the Lokeshvara 'Resting in the nature of mind' which can have a similarly raised right knee.

The third [3] is in a thinking posture with the right hand next to the face with the elbow often resting on the leg.

The fourth type is very much an assortment of different kinds of seated Lokeshvara. Some of them may be variations of the Khasarpana Lokeshvara while others are clearly unidentified and unique in appearance and distinct from the iconic tantra based images. 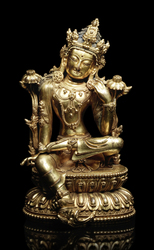 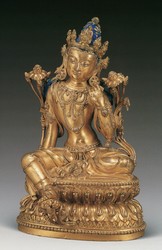 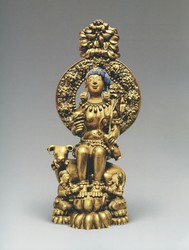