The deity Achala was introduced to Japan by Kobo Daishi Kukai during the Heian period (9th century). Achala appears in many texts, but the most important within the Shingon sect of Tantric Buddhism is the Mahavairochana Abhisambodhi sutra. Achala is considered a meditational deity (Tibetan: yidam) and an emanation of Vairochana. Achala was practiced primarily together with the five Wisdom Kings (Yamantaka, Trailokyavijaya, Kundali, Vajrayaksha and Achala) until Amoghavajra moved the position of the central figure away from Trailokyavijaya to Achala. Often invoked to guard the country from foreign invaders and epidemics, Achala was also an influential deity for wealthy warrior families and artists. Achala is often associated with a fire rituals known as 'goma.' While performing the ritual, the practitioner abstains from eating, drinking and sleeping for nine days and focuses single mindedly on the 'goma' activities and duties.

The main text in Japanese Shingon Buddhism that provides a reference for Achala is the Dainichi-kyo or Mahavairochana Abhisambodhi sutra. This text, considered both a sutra and a tantra, was very popular from approximately the 7th century onwards. One of Achala's principal functions is that of a protector/guardian of the Vajrayana teachings. He is also regarded as an emanation of Vairochana Buddha (central deity of Shingon Buddhism).

Kukai, also known as Kobo Daishi, went to China, specifically Chang-an, during the Tang dynasty to study Eastern Vajrayana Buddhism. On his return to Japan, he brought esoteric texts including the Hizouki or Sohiron, and other practice manuals for the meditations and rituals of Achala.

Within the Tendai school of Japanese Tang style Vajrayana Buddhism, there is an advanced training regimen where the practitioner fasts for seven days in strict retreat while reciting Achala’s mantra 100,000 times. During this fasting period the retreatant must not lie down, nor sleep. There is another practice where the retreatant must perform 700 fire rituals 'goma' while fasting, all within nine days. The tradition has been kept up to the present time as a sacred entrustment at the Enryaku-ji temple in Shiga prefecture.

Amoghavajra (705–774) who was the principle disciple of Vajrabodhi (671–741), decided to move the primary position of the five wisdom kings (Yamantaka, Trailokyavijaya, Kundali, Vajrayaksha, and Achala) from Trailokyavijaya to Achala. Amoghavajra viewed Achala as a more suitable choice since Achala is regarded as an emanation of the cosmic Buddha himself (Vairochana).

Kukai brought two iconographic styles of the Fudo Myoo (Achala) to Japan. The first is the Jinguji-temple mandala sitting figure style. The second is the Nin-no-gyo mandala standing figure style common to the To-ji temple

According to the Shingon tradition there are nineteen specific traits, or characteristics, of Achala that represent his spiritual and supernatural qualities. Among these enumerations, especially important are the eyes, braids of hair, and weapons. 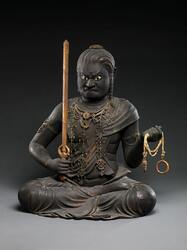 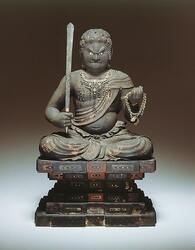 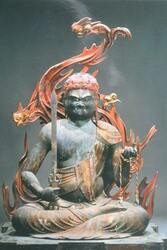 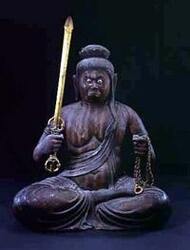 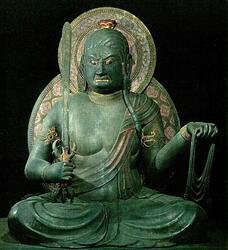 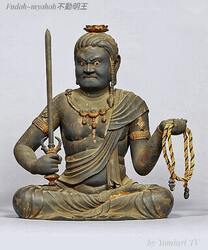 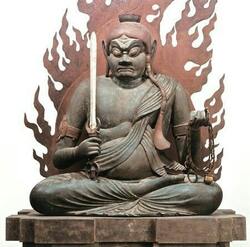 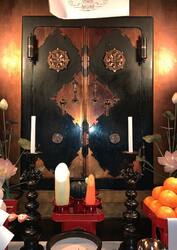 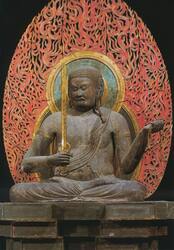