Vighnantaka (Tib.: geg tar che. English: Killer of Obstacles). Vighnantaka is a meditational deity that functions as a remover of obstacles. In the two armed form Vighnantaka is identical to Krodha Vajrapani also in a two armed form. Both figures hold a vajra scepter upraised in the right hand and a wrathful gesture at the heart holding a lasso with the left hand. As a member of the Ten Wrathful Ones he is described in several different tantras and can have a number of different appearances. He can appear with one face and two arms or with three faces and six arms. Vighnantaka always appears in a wrathful form.

There are three other deities with similar names making a group of four deities with the same ending: Vighnantaka, Prajnantaka, Padmantaka and Yamantaka. These four often are included in the set of Ten Wrathful Ones.

[48. Bari Gyatsa]
"Vighnantaka, [with] a body blue in colour, one face and two hands. The right [hand] holds aloft a vajra. The left, a wrathful [gesture held to] the heart, together with a lasso. Having bared fangs and three eyes. [With] brown hair bristling upwards. Adorned with jewels and snakes and having a lower garment of tiger skin. Standing in a manner with the left leg extended." (One Hundred Methods of Accomplishment, Konchog Lhundrub, 1497-1557).

[123. Drub Thab Gyatso. Vighnantaka, Blue with One Face and Two Hands. Folio 129]
"Krodha Vignantaka, blue in colour, with one face and two arms. The right hand holds a vajra upraised and the left held to the heart in a wrathful gesture together with a lasso. Having a grimace and bared fangs, orange hair bristling upwards. Adorned with ornaments and snakes, having a lower garment of tiger skin. Standing in a manner with the left leg extended." 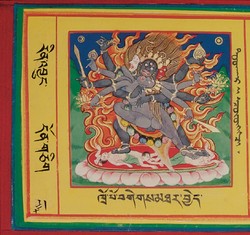 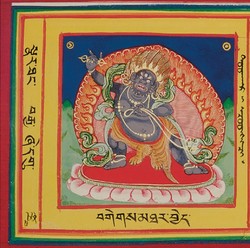 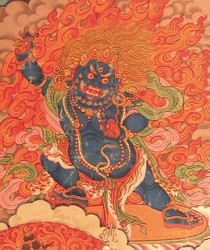 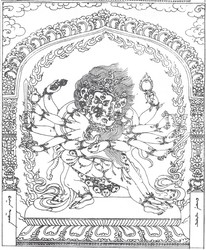 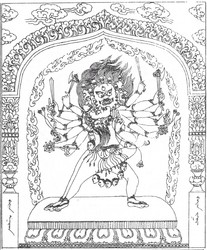 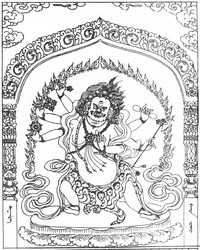 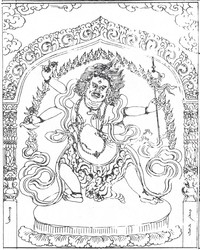 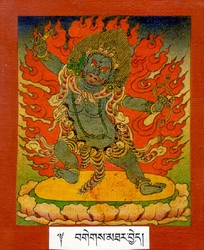