This is quite an exceptional collection of paintings. The dates of the works span the 15th century through to the 19th century with the majority of pieces falling between those two dates. There are three noteworthy sets of paintings:
- Khon Family Set (3 of ? paintings)
- Milarepa Life Story Set (2 of 19 paintings)
- Shakyamuni Buddha & the Sixteen Arhats (1 of 23 painting)
- Tseringma Five Sisters (Tinggyi Shalzangma) (1 of 5 painting)
- Twelve Rituals Set (Kunzang Gyawa Gyatso) (1 of 12 painting)

The single paintings in the collection are the Confession Buddhas, Padmasambhava, Lokeshvara Chaturbhuja, the two Tsongkapa (painting 1, painting 2), Gelug Refuge Field, Red Mahakala and Tenzin Rabgye. There is a single sculptural work depicting the guardian King of the North Vaishravana Riding a Lion. This is a Chinese work dating to the Kangxi Imperial period, late 17th early 18th century.

All of the works except for one are Buddhist. The lone Bon Religion painting is of Kunzang Gyalwa Gyatso. This subject belongs to the Bon iconographic group called the Twelve Rituals (cho ga chu nyi) representing twelve important events in the life of the Bon founder - Tonpa Shenrab. 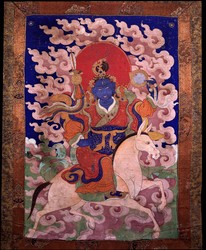 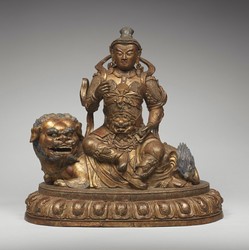 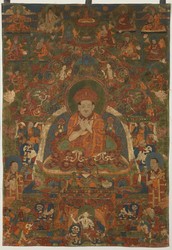 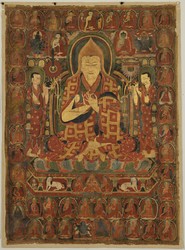