Three mahasiddha figures Dombi Heruka #7, Saukarika #25 and Charyapa #63 from the group of Eighty-four Mahasiddhas according to the Vajrasana system of enumeration. The system refers to the names listed and their order along with their representation in art as derived from the 11th century Sanskrit text Praise to the Eighty-four Mahasiddha. There are only two popular systems for representing the eighty-four mahasiddha in art, that of the Abbot Vajrasana and the scholar Abhayadatta Shri (Abhayakara Gupta).

There would have been eighty-five or eighty-six mahasiddha sculpture in total with the center piece as Buddha Vajradhara. (See a list of names for all eighty-four). An inscription on the back of each states that they were made at 'Nyug' and then given to a Great Assembly, which could mean a Great Assembly hall in a large monastery or given during a great assembly of religious teachers, monks, nuns and lay people.

Inscription: "Made at Nyug, given to the Great Assembly."

#7 Dombi Heruka:
"Seated on a mat crossing the Ganga,
Riding a tiger and obtaining siddhis,
Known as Dombi Heruka,
To that teacher I bow."

#25 Saukarika:
"A Brahmin who actually saw the Buddha,
Gaining the attainments in the form of a layman vow-holder,
Known as the Swine Herder,
To that teacher I bow."

#63 Charyapa:
"Having knowledge in the path of the method of veins and airs,
Obtaining self mastery of the physical form,
Known as the Charyapa,
To that teacher I bow."

There were three famous abbots of Bodhgaya Monastery (Vajrasana Vihara) known by the name Vajrasana and referred to as the elder, the middling, or the younger. An 11th century Sanskrit text, in four-line verse, praises each of the eighty-four mahasiddha. This text, the Praise to the Eighty-four Mahasiddha, names a Vajrasana as the author in the colophon. This author is likely to be the elder, or middling of the three. There is a curious irregularity with the Vajrasana enumeration of the mahasiddhas. Even though the title and the colophon state cleary that it is a verse Praise to the Eighty-four Mahasiddha there are in fact eighty-five mahasiddha named in eighty-five four line metered verses. This anomaly remains unexplained. 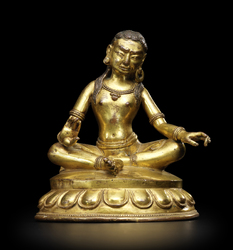 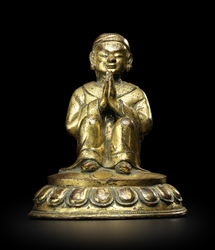 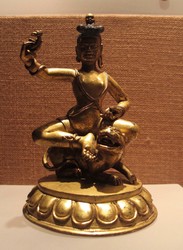