Shakyamuni Buddha, Previous Life Stories (Sanskrit: jataka. Tibetan: kye rab): from the famous Indian text presenting 34 morality tales drawn from the previous life stories of the historical buddha, Shakyamuni. The story below is about a selfless rabbit and the Indian god Shakra. In the early Buddhist texts the name Shakra is used as an alternate name for the god Indra.

A Tale of Selfless Generosity.

In this lifetime the Bodhisattva was born as an animal, a rabbit. Yet even as a rabbit, he possessed incredible virtue, goodness, beauty, and vigor; so much so that the other animals viewed him as their king. None feared him and none caused him fear. Among his devoted following, three animals in particular became his closest students and companions. They were an otter, a jackal, and a monkey, who through the Bodhisattva's teaching, forgot their lower animal nature and became infinitely compassionate themselves.

As instructed by the rabbit in a teaching one night, it was customary that on the next day, a holy day, to offer alms to anyone who passes through their forest. Later that night, the rabbit was distraught as he realized he had nothing to offer. 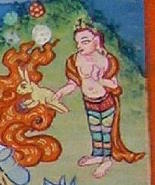 His three companions had ample means to feed a guest, but the rabbit had nothing but the meager blades of grass he ate to sustain himself, which were far too bitter to offer a visitor. Then he realized he could offer his own flesh as food and without hesitation, decided this was what he would do.

Hearing this, Shakra, the lord of gods, went to test the animals and disguised himself as a weary traveler who had lost his way. Hungry, thirsty, and crying with despair, the four beasts rushed to his aid. The otter was able to supply the man with seven fish, the jackal a lizard and some sour milk, and the monkey some soft ripe mangoes. Seeing that the man had built a fire, the rabbit explained that he was offering his own body and then, without hesitation, lept into the hot coals and swirling flames.

Shakra rejoiced, reached into the fire and pulled out the rabbit and then lifted him up into the heavens and displayed him before the gods.

Then Shakra, having in mind the good of the world and the glorious example of the animal bodhisattva, adorned the top of his own palace, Sudharma, the palace of the Gods, with an image of a rabbit. He also adorned the face of the moon with the same image. It is said that even today, the image of the rabbit can be seen in the full moon.