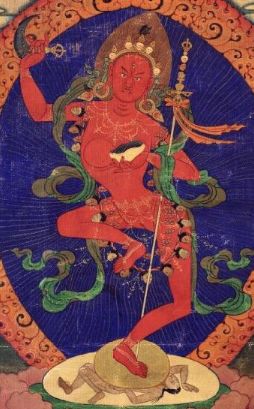 There had existed a rite of initiation of a disciple into the Maṇḍala of the female deities only, named phag mo lha so? bdun ma [Thirty-seven Deity Varahi], which was based on the ākhyā-Tantra of the Saṃvara cycle. There {R 390} also had existed several rites of worshiping and meditation on this maṇḍala.

The majority of the Tantric yogins in this Land of Snows (Tibet) were especially initiated and followed the exposition and meditative practice of the system known as phag mo gzhung drug and based themselves on the sdom pa rgya mtsho. This method was also bestowed by king Indrabhūti's sister Lakṣmīṅkara (lha mo dpal mo) on the Venerable Virū pa, who in his turn bestowed it on one known as the great Avadhūtipa or Paiṇḍapātika, the Great (bsod nyoms pa). He was a native of Eastern Bengal and a kṣatriya by caste. He was ordained in the Mahāsaṅghika sect and practised meditation on Guhyasamāja-Man͂͂juvajra. After he had seen a distressing dream that he had swallowed the Sun and Moon, he went to see Virūpa (bir wa pa), and obtained from him the initiation into the Cycle of the Yoginī and at the same time saw a vision of the goddess. He listened to the exposition of the Tantra and its mystic precepts, and practised them. Then Virūpa introduced him to the practice.

When he began the mystic practice on the banks of the Ganges, there was a trident which could not be moved by men, and on which heretics used to jump, believing that death would give them emancipation. He seized it and threw it into the Ganges. The heretics begged him to restore the trident, and having taken it out (from the river), he handed it to them, saying: "On this Path there is no emancipation!?
The man who had obtained such supernatural powers (siddhi) became the Teacher of ldong ?ngar ba. He belonged to a low caste of Magadha. A strong desire was born in him to enter religion. Having heard that one called Avadhūti pa was residing in Bengal, {R 391} and had attained Enlightenment, he disguised himself as a monk, and having taken with him several kārṣāpaṇas, he went to see Avadhūtipa. (On reaching there), he saw an elderly monk ploughing the field with a pair of oxen, while his wife was engaged in collecting insects. At first he felt somewhat disturbed and thought to himself: ?Must I make my request to this one?? Having presented the coins, he made the request to be admitted as follower. "But you do not trust me!" said Avadhūti pa. "It is true!" said he, and having entreated him fervently, he followed on Avadhūti pa for three years. Then Avadhūti pa initiated him for the first time and he had a clear vision of Vajravārahī. He obtained a special supernatural power (siddhi).

Then he left him, and while residing at Jālandhara, he heard about a heretic who was engaged in a contest with the monks of Vikramaśīla, in both philosophy and supernatural powers. The latter had difficulties in finding (a scholar) who would be able to defeat the heretic. On learning this ldong ngar ba proceeded there. When they had installed the king to act as arbiter and were about to begin the debate, the heretic said: "Shall we contest in philosophical knowledge, or supernatural powers?" "As you like !" replied 1dong ngar ba. "Well then, I shall send a snake towards you!" and the heretic sent towards 1dong ngar ba a poisonous and glittering snake to destroy him. The ācārya then revealed his hog head (he was a devotee of Vajravārahī) and with the sound 'thik' he swallowed the snake, and thus defeated the heretic, who was converted to the Doctrine of the Buddha. The heretic said: "A hog-faced god belongs to the heretics and does not exist among Buddhists!" That is why ldong ngar ba composed a sādhana of Vajravārahī, and bestowed on the Junior Paiṇḍapātika (bsod nyoms pa), named Jinadatta, the system (of Vārahī).

A king of Southern be ta la was childless. The king once held a great feast and a son was born to him, whom he called Bhojadeva. Later, when the boy became king, he proceeded to a forest accompanied by his {R 392} retinue. There 1dong ngar ba assumed the form of a beggar yogin and gazed for a long time at the king. The king became angry and ordered his retinue to kill the yogin. ldong ngar pa pronounced several discourses (on Truth), and the king having abandoned his kingdom, took up meditative practice. In the country of the South he became known as the "alms-gatherer" (bsod nyoms pa) Jinadatta (rgyal bas byin) and attained supernatural faculties.

This "alms-gatherer" took with himself as attendant tsha'o Buddhadatta (sangs rgyas byin) and proceeded to Nepāl. He begged for alms at the door of one named ma he bha ro. bha ro sent a maid-servant with some food and wine, and when she was pouring wine into his skull-cup, the wine began to boil. Greatly amazed the maid-servant, reported the matter to bha ro. bha ro was filled with faith and went out himself to give alms.

While Jinadatta was staying there partaking of food offered by bha ro and others, he met Devākaracandra, whose secret name was Śūnyatā?samādhivajra (stong nyid ting 'dzin rdo rje). This ācārya belonged to the nobility of the great city of ya 'gal and was the only son. When he was eight, his father married him and ordered him to lead the life of a householder, but the boy said: ''I shall enter religion," and did not listen to his father's words. "Where will you enter?" inquired the father. "I know one from whom I shall inquire," answered the son, and for seven days he circumambulated the Ārya?-Jamali (in skyi rong). On the last day, he said to (his father): ?Send me to the country of India!" and thus proceeded to India. He requested to be ordained at Vikrama?śīla, but was told that the number of the congregation was not sufficient {R 393} to hold an ordination ceremony and was not permitted to take up ordination.

He then studied (Sanskrit) grammar and logic and became very learned. He met the Nepālese Ratnaśrī and studied under him the Sampuṭa and the Hevajra (Tantra), and thus became a great scholar. When he was 20, he returned to his own home and amassed much property. When he heard that bha ra had a house hold priest named bsod nyoms pa (Paiṇḍapātika), he felt faith born within him and proceeded to meet him, having taken three ngas pa co ra.

He requested to be given initiation and the ācārya replied: ?You are a paṇḍita! Why do you make your request to an ignorant man?" But he again and again begged to be given precepts, and finally the ācārya said: "Well now, the initiation must be given! Fetch here provisions!" ma he bha ro and Devākaracandra obtained initiations at the same time. At the time (of the initiation), the teacher blessed a skullcup full of wine and though they partook of the wine, the cup remained full. tsha? bo sangs rgyas byin also blessed (the skull-cup full of wine) and the same thing happened. The teacher then imparted the Doctrine to them and bestowed on them secret precepts.

Devākaracandra requested the teacher to write down the zhal gnyis ma che ba, the don grub ma che ba and the sbyin bsreg but the teacher did not agree to it. Then the sbyin bsreg was written down by Buddhadatta who had obtained permission from the teacher. Again the teacher was invited by ha mu dkar po and bestowed on him the complete initiation and secret precepts.

During {R 394} the initiation rite, five girls were compelled to attend the rite with the help of mantras and they were made invisible (in order that) the wife of ha mu might not see them. The wife saw only cups of wine suspended in the air and did not see the girls (who were holding the cups). She asked the teacher: "How could this be?" "I have blessed them!" replied the teacher.

At that time, in the country of Nepāl, five had gathered, four disciples stong nyid ting ?dzin, ma? he bha ro, ha mu dkar po and Buddhadatta, and the teacher. ha mu presented five golden srangs. Then the teacher said that he was going to India and the three disciples accompanied him as far as Bodhgayā (rdo rje gdan). When they met robbers on the way, they asked what they were to do and the teacher said: "I have a way!" He then blessed the robbers and these began to dance, and while they were engaged in dancing, they all escaped. The three disciples returned from Bodhgayā but the teacher proceeded to South be ta la.

stong nyid ting 'dzin practised meditation during six years and obtained special faculties. But, because he had written down the zhal gnyis ma che ba and the don gsal ma che ba, and thus had somewhat acted against the teacher's will, his worldly possessions decreased and he used to say: "This must be a handicap caused by loka-ḍākiṇīs."

There were many other books written by him (Devākara-?candra): the shes rab ye shs gsal ba, the bdag med ma'i mngon par rtogs pa, the spyan ma?i ngan song yongs su sbyong ba and the kye'i rdo rje dkyil 'khor gyi cho ga. These had been translated into Tibetan.

The story of this dpyal family was as follows: A minister of the Dharmarāja khri srong lde btsan had three sons. The king used to call them: the 'White', the 'Black' and the 'Piebold', and thus their descendants began to be known as the: "White, Black and Piebold dpyal". Most of the early descendants had been excellent kalyāṇa-mitras belonging to the "Old Believers" (rnying ma pa). Of these, dpyal 'byung gnas rgyal mtshan having collected much gold, presented the gold to the owners, and bought Smṛti out who had become a shepherd. After that Smṛti amassed a large fortune. When the paṇḍita preached at bres, a shower of gold and turquoise fell. Though he was requested to stay on, he did not listen and proceeded to khams.

The nephew of dpyal 'byung gnas rgyal mtshan - se tsha bsod nams rgyal? mtshan proceeded to Nepāl, and there met pham mthing ba. He heard (from him) the exposition of the Cycle of Hevajra and other Cycles, according to the system of na ro pa. He also composed a commentary on the Hevajra (Tantra) and thus the study (of this Tantra) continued for a long time among the members of the dpyal lineage. He also made numerous translations of the commentary of Bhava-?bhadra and of other texts. His nephew kun dga' rdo rje became very learned in the books of the "Old Believers" (rnying ma pas) according to the zur system in Tibet. He also obtained the Tantras of the "New" class which were handed down among his ancestors and the precepts of the nam mkha' skor gsum from the Nepālese Kāyaśrī. He presented Kayaśrī with about 50 golden srangs and thus pleased him.

Later, he proceeded to Nepāl and received from ha mu dkar po the six texts (chos drug phag mo chos drug) together with their initiations. But ha mu did not give him the special precepts. Further, he again made offerings to ha mu and his consort, and pleased them both, and finally was given the 13 special precepts. At that time, the Indian Vajrapāṇi (phyag na) was also residing in Nepāl. He accepted him and stong nyid ting 'dzin {R 396} as teachers. He thought that since Vajrapāṇi was a wealthy man, he could not invite him, and therefore invited Devākara, but did not succeed in collecting funds.

The chapter on the Six Treatises of the (Vajra)vārahī Cycle.
(The writer is dol pa nyi shar).