Chandra is the god of the moon and belongs to a broad Indian cultural context. He is found in all Indian religious traditions. The mandala images below primarily belong to the Newar Buddhist religion of Nepal. Some of the paintings are dated by inscription and others are dated only tentatively based on comparison and style with the dated works.

The chariot of Chandra, white in colour, is drawn by seven white geese and the god Surya, red in colour, drawn by seven horses. Based on the number of known examples, the Chandra mandala appears to be more popular with relatively few examples of the Surya mandala identified. Both mandalas derive from the same Newar source literature.

In Tibetan Buddhism the god Chandra is rarely if ever depicted as a central figure alone or at the center of a mandala. However, he can be found as an emanation in depictions of Shristhikantha Lokeshvara according to the descriptions in the Karandavyuha Sutra. Chandra is generally only found as a retinue deity in various mandalas of the Charya and Yoga Tantra classifications and as a trampled deity under the feet of Vajrabhairava and other Yoga-niruttara (anuttarayoga) Tantra meditational deities.

In the Karandavyuha Sutra there is a description of a number of Hindu gods arising from the body of Lokeshvara. However, there is no description of Lokeshvara having a red colour, or in a standing posture. It is most likely that the paintings shown below are also based on the much later and extended version of the Karandavyuha Sutra, in verse, popularized in Kathmandu in the first half of the 2nd millennium. 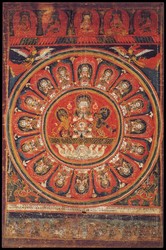 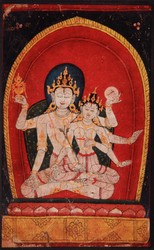 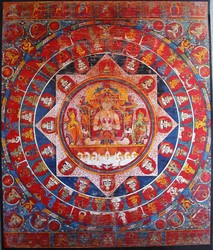 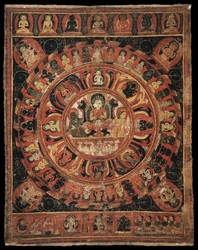 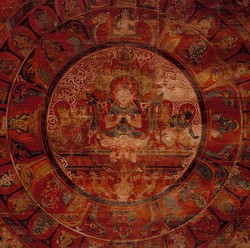 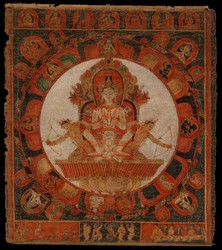 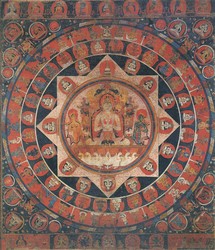 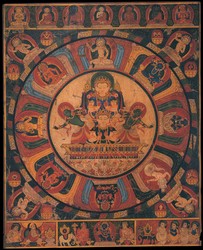 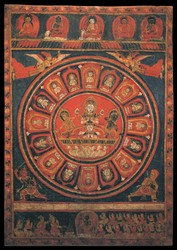 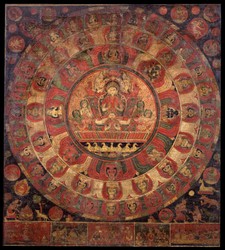 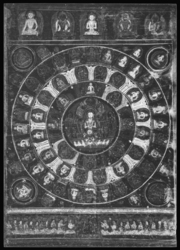