Key Elements in the Meditation Instructions Painting:
- The monk holding an elephant goad and a lasso is the individual.
- The flame represents effort.
- The elephant represents the mind.
- Black elephant colour - the mental factor of sinking - lethargy.
- The monkey is distraction.
- Black monkey colour - the mental factor of scattering.
- The Five Objects of Sensory Pleasure, depicted at the sides of the path, are the object(s) of distraction.
- The rabbit represents subtle sinking - lethargy.

Meditation Instructions for Calm Abiding (Shamatha) in the form of a painting with accompanying instructions. The idea of relating the mind to an unruly elephant along with the monkey and other elements in the visual example of Calm Abiding meditation originates in the writings of Asanga and then later in the meditation commentaries of Je Tsongkapa. It is thought that the artistic depiction of the practice is relatively late and possibly first arose in the 19th century as a wall mural. The image above is of a poster published in India in the early 1970s. An original Tibetan version of the painting has not yet been located, however images of a Bhutanese mural from Thimpu Tango Shedra have been added below. 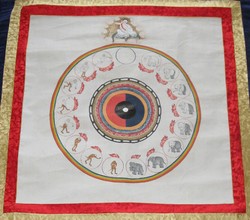 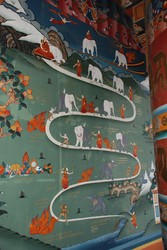 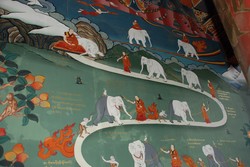 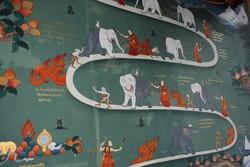 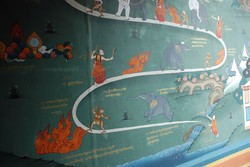 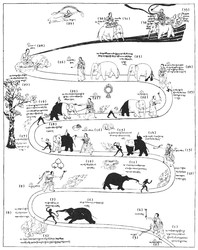