Vajrapani has two main categories of form, narrative and iconic. Vajrapani has a role in Mahayana Buddhism and the narrative sutras. In that role Vajrapani can be depicted in art as representing a bodhisattva figure. In Tantra Vajrapani then takes on the added role of being a meditational deity. Many of the Vajrapani sculpture that are in a standing posture belong to sets of the Three Lords of the World which is a Kriya Tantra mandala meditational practice of Manjushri, Lokeshvara and Vajrapani. Other sculpture belong to sets depicting the Eight Great Bodhisattva.

Vajrapani is often confused for Vajrasattva. Vajrasattva is a meditational deity and is depicted in very static iconographic poses. He is not a figure from the Mahayana sutras and narrative literature. Typically, almost always, until proven otherwise, Vajrasattva is NOT depicted in a standing posture.

Depictions of Vajrapani and Vajrasattva in sculpture and painting are commonly confused with the similar deities Vairochana Buddha, Vajradhara, Vajravidarana, the Five Symbolic Buddhas in Sambhogakaya form, White Chakrasamvara and others. All of these deities, OTHER THAN SUTRA VAJRAPANI, are meditational deities that belong to the Tantric system.

In a number of Yoga Tantra examples the form of Vajrapani, in the Sarvadurgati Parishodhana Tantra system, appears exactly the same in appearance as the typical 'Solitary Hero' Vajrasattva. A sculpture of the primordial Buddha Vajradhara has the exact same physical iconographic appearance as Heruka Vajrasattva - also depicted with the two hands holding a vajra and bell crossed in embrace holding the consort. 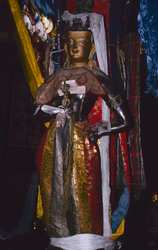 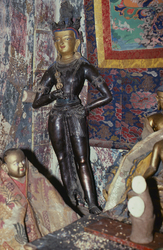 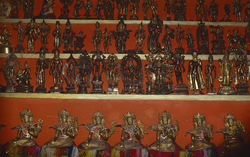