Manjushri as a sculptural figure fashioned from metal, clay or wood, can be depicted in a standing posture. The majority of such images represent a non-iconic form of the deity that simply portrays Manjushri as an important figure and student of the Buddha from the Mahayana Sutra literature. These images are non-iconic and narrative based. Only the grouping of the Three Lords of the World, Manjushri, Lokeshvara and Vajrapani, belong to the Vajrayana system and specifically to the Kriya Tantra classification.

Standing representations of Manjushri might also be created to accompany statues of the Buddha where a bodhisattva figure would stand on the right and left side of the central Buddha, or possibly the figure of Amitabha Buddha. The most common accompanying figures are Avalokiteshvara, Maitreya, Vajrapani and Manjushri.

Manjushri as a bodhisattva, figure rather than representing a Tantric deity, is also commonly found as a member of the group of Eight Great Bodhisattvas. In early Himalayan and Tibetan art these figures were typically depicted in a standing posture. Over the centuries the Eight Bodhisattvas have become less popular and are now not commonly found in temples as new constructions.

A small number of these sculpture represent Manjushri as part of the group known as the Three Lords of the World. This famous group described in the Kriya Classification of Buddhist Tantra literature are often depicted as a group of three standing figures. Sometimes the figures are physically connected by sharing a metal base and at other times they are created as three separate free standing sculpture that can easily be separated over time and removed from their original context. 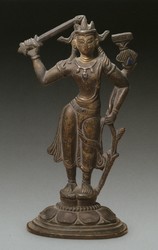 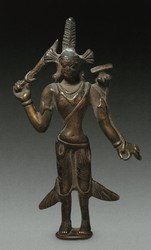 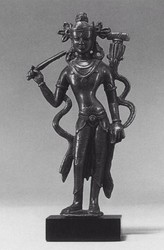 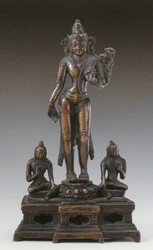