Satrig Ersang (Tibetan: sa trig er sangs): the principal female deity of the Bon Religion. Satrig Ersang ranks with the highest of Bon Deities/Gods being included as one of the Four Transcendent Lords and named first among them. She is typically only depicted in the company of the Four Transcendent Lords, and together they form a set of paintings, sculptural figures or murals that are generally found in each and every Bon temple or shrine.

In paintings she is commonly surrounded by the two-hundred and fifty sanggye (enlightened ones) - all female. Each of the Four Transcendent Lords is surrounded by a similar group making a total of 1000 sanggye of the Bon Tradition. In the West this assembly of 1000 has often been mistaken for the 1000 Buddhas of the Aeon according to the Buddhist Mahayana Tradition.

Description: Peaceful in appearance, female and beautiful, Satrig Ersang has one face and two hands. Typically she has the two hands held at the heart holding the stems of two flowers supporting a yungdrung on the right side and a mirror on the left - above the shoulders. The two legs are in a tight cross legged posture.

Sherab Chamma is another form of Satrig Ersang and can be thought of as an activity manifestation of Satrig Ersang where she takes on the roles of a meditational deity, a deity of healing such as Yeshe Walmo, and in her most horrific of appearances - Sipai Gyalmo - the principal protector of the Bon Religion. 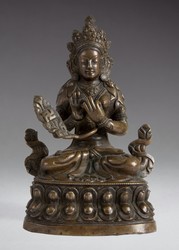 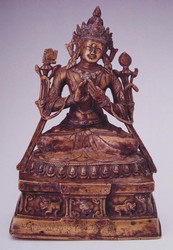 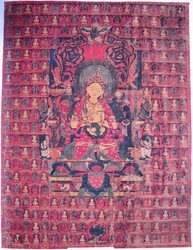 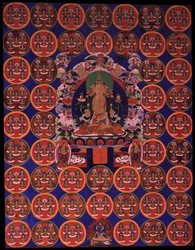 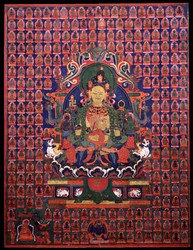 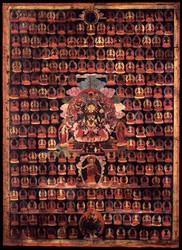 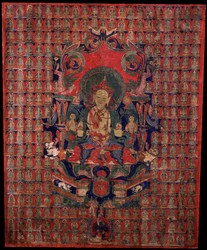