In the central position, dark green in colour with one face and two hands, the meditational deity Tara gazes forward in a peaceful appearance. The right hand placed at the heart holds the stem of a lotus flower blossoming at her right shoulder supporting an upright curved knife with a vajra handle. The left hand holds to the heart a white skullcup. Both arms embrace the consort. Her long black hair is piled on the crown of the head with some hanging loose across the shoulders. Adorned with a tiara of gold and jewels, red ribbons, large earrings, bracelets and anklets, she embraces the consort Buddha Amoghasiddhi with the two arms and straddles his waist with the legs. Light green in colour with one face and two hands, he holds a variously coloured vishvavajra in the left and a gold bell in the right. Adorned with a gold crown, earrings, necklaces, bracelets and a jewelled girdle, he is locked in a sexual embrace and passionate kiss; seated in vajra posture above a white moon disc and lotus blossom. 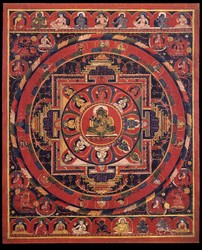 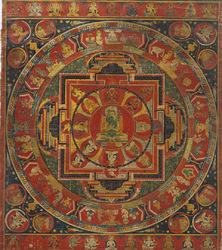 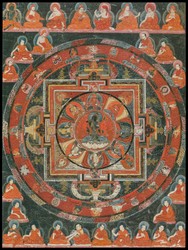 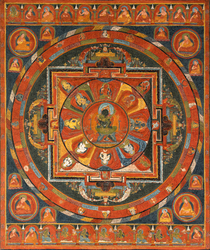