The principal and minor forms of Tara all have one face and two hands, green in colour, and seated with the right leg extended and the left drawn up. The right hand is typically extended across the knee in a gesture of generosity. In some examples the hand is placed over the knee with the fingers pointing upwards in a fearless gesture. All are peaceful in appearance with corresponding ornaments and heavenly garments. The only exception to this is the Peaceful by Day, Wrathful by Night Tara that also has the fierce form.

"On an and eight petalled lotus...is Holy Tara, reddish-green in colour, one face and two hands. The right [hand] is in the gesture of supreme generosity and the left holds with the thumb and ring finger a lily to the heart. Wearing beautiful jewel ornaments and various silks, the hair as a crown, seated in a posture with the right leg extended and the left drawn up. On the right [side] is orange Marichi holding in the left [hand] a branch of the Ashoka tree. On the left is black Ekajati holding a skullcup in the left. Both hold in the right [hands] a fly-whisk; adorned with jewels and beautiful silk clothing, with the two legs placed equally in a standing manner." (Thartse Panchen Namka Chime). 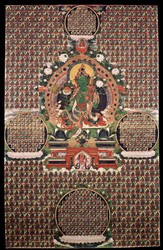 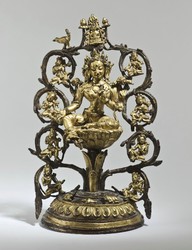 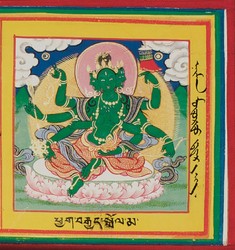 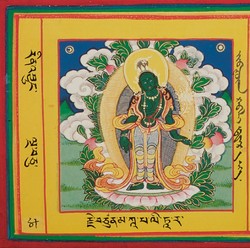 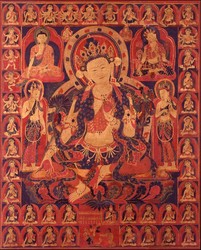