Buddhist Examples:
- Bhurkumkuta, Krodhini: typically a male deity, in this one particular form called Krodhini the deity is female.
- Buddha: the form of the Buddha, any Buddha, is described as having Thirty-two Major and Eighty Minor Marks or physical signs on the Body. One of these marks is the male genitalia retracted inside the body, along with soft and supple skin, and free of obvious musculature.
- Maning Mahakala: regarded as the eunuch Mahakala, without male or female gender.
- Others...

Hindu Examples:
- Shiva, Ardhanarisvara: the Hindu god Shiva and the consort Parvati as a single deity.
- Shivaa: the female form of the god Shiva appearing as a female but with all of the attributes and characteristics of the male Shiva.
- Vishnu, Vaikuntha Kamalaja: the Hindu god Vishnu and his consort Lakshmi appearing as a single deity.
- Others... 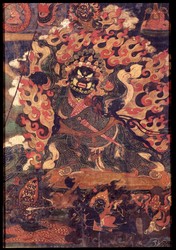 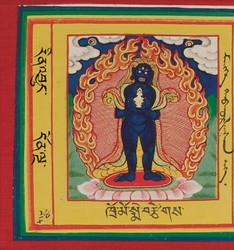 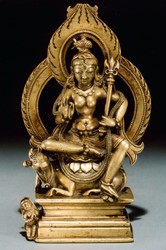