There are four types of gender represented in Himalayan art: male, female, both, and neither. The gender categorized as both (androgynous) includes the Hindu god Ardhanarisvara Shiva together with the consort Parvati as a single deity followed by the Hindu god Vaikuntha Kamalaja Vishnu and his consort Lakshmi appearing as a single deity.

Only Maning Mahakala practiced in the Nyingma Tradition of Tibetan Buddhism is regarded as Neither Male nor Female (asexual), although there is some dispute regarding the meaning of this term 'ma ning.'

In the Buuddhist pantheon there is only one deity, identified so far, that has a male and a female form. Bhurkumkuta typically appears as a male deity however there is one tradition that presents him/her as Krodhini Bhurkumkuta, a female, with one face and two hands.

Some modern Karma Kagyu texts of the 20th century have described the Vajravidarana deity of the Shangpa Kagyu Tradition as being a female deity. This is not yet supported by any literature written prior to the 20th century. 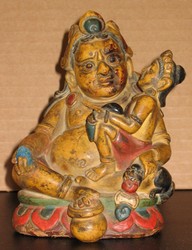 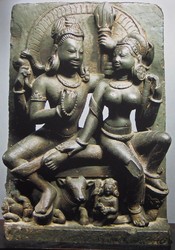