Neither of his parents were Buddhist, yet, at least according to tradition, they supported his childhood aspiration to immerse himself in the religion. He was ordained at the age of thirteen by Khenpo Yeshe Zangpo (mkhan po ye shes bzang po, d.u.). In 975, while still a teenager, he convinced his parents to allow him to go to India to study Buddhism. (As will be mentioned below, later histories have it that he was sent to India by royal decree.) He set off with a travelling companion named (according to some sources) Tashi Tsemo (bkra shis rtse mo) and food provided by his mother. On the road they met considerable difficulties, including theft, illness, and bizarre customs, passing into Kashmir via Spiti and Kulu.

In Kashmir he met his first teacher, Sraddhakaravarman, and began studying Sanskrit texts on philosophy and tantric practice. He remained there for seven years, after which he went to the southeast, to Vikramasila for several years, before returning again to Kashmir. He then returned to Tibet, possibly in 987, after thirteen years in India.

According to tradition, Rinchen Zangpo used his Buddhist accomplishments to expose a teacher who was attracting a large crowd by levitating; Rinchen Zangpo is said to have pointed a finger at him, at which point the teacher spun head over heals and fell from the sky, slinking off never to be heard from again.

Such an incident perfectly placed Rinchen Zangpo to be noticed by King Songnge (srong nge), whose ordination name was Lha Lama Yeshe O (lha bla ma ye shes 'od, 947-1024; abdicated in 988). The king of Guge at the time, he was then engaged in reforming Buddhism in Tibet, sweeping away what he considered the Tibetan corruptions of the religion that had arisen since the collapse of the Yarlung Dynasty in the mid ninth century.

At the new royal monastery of Toling (thod ling) that Rinchen Zangpo had a hand in constructing, he was joined by a number of Indian panditas and with them set about making new translations. He is known to have worked in two temples there, Pel Leme Lhungyi Drubpa (dpal dpe med lhun gyis grub pa) and the Golden Temple (gser kyi lha khang).

Rinchen Zangpo went again to India, travelling this time in fine style, contacting Indian artisans to create the icons and murals for the new temples, and returning to Guge after six years.

Some of his biographies have it that Rinchen Zangpo's initial trip was sponsored by Yeshe O, who sent twenty-one young Tibetan men to India to learn Sanskrit and bring back scripture; all died in India save Rinchen Zangpo and Legpai Sherab (legs pa'i shes rab, d.u.), the son of his paternal uncle, who became known as the Lesser Translator (lo tsA ba chung ba). He was also known as Dragjor Sherab (grags 'byor shes rab)

Whether he went first on his own or both times in royal employ, during his two trips to India (some sources have it that he went three times) Rinchen Zangpo is said to have studied with over seventy-five Indian panditas. Among them, he learned the Yogatantras from Ratnavajra, Guhyasamaja from Naropa, the Durgati Parisodhanatantra from a teacher whose name in Tibetan was Norbu Lingpa (nor bu gling pa), and, at Vikramashila, he studied with Dipamkarabhadra, Jinakara, and Duryachandra, whose commentary on the Chakrasamvara was later of significant importance for the Sakya tradition. In Tamalasinta he studied Yogatantra with Shraddhakaravarman. In Tibet he also studied with Shraddhakaravarman, who taught him the system of Vajrodaya (rdo rje 'byung).

Among the Indians who worked with him in Toling was Dharmashribhadra, who contributed, together with Shakya Lodro (shAkya blo gros, d.u.) to the translation of the Bodhicharyavatara. The name of at least one artist he hired is known: Bhidhaka, who created a statue of Avalokiteshvara of the size of his father that was installed at Gokhar Lhakhang (go khar lha khang) in Khatse (kha tse) and still exists today.

He promoted several tantric traditions, particularly Yogatantra, translating numerous commentaries on the Sarvatathagatatattvasamgraha, and he was the first to introduce the Cakrasamvara tantra to Tibet. He also is credited with disseminating the "mother" (ma rgyud) and "father" (pha rgyud) classes of the Anuttarayoga tantra.

He is said to have taken full ordination at the age of forty-nine with Chandraprabha, Kamalarakshita, and another teacher named Bhi-na-se, presumably during the second Indian trip.

Rinchen Zangpo is equally famous for his contribution to the creation of temples; he is said to have constructed one hundred and eight temples, a number that Tibetans use to signify a considerable amount. His fame is such that perhaps even more than that number of small temples are now claimed to have been built by him.

Most of the attributions to Rinchen Zangpo must be taken with some suspicion, as they are the invention of later tradition. Some of the more notable contributions he is said to have made include what would have been his first major temple, after Toling, Khachar (kha char; also spelled 'kha' char and 'khab char), a royal temple sponsored by either King Lhade (lha lde, 996-1024), the nephew of Yeshe O and the uncle of Jangchub O (byang chub 'od, r. 1037-57) who invited Atisha Dipamkara (982-1054) to Tibet, or, alternately, by King Khorre (khor re, r. 988-996), Lhade's father and the brother of Yeshe O. This temple is likely near a town called Langka northwest Ladakh. Another temple was named Nyarma (mya ma), now a pile of ruins near Thiksay in Ladakh. He is also credited with establishing the famous Tabo Monastery in Spiti in 996.

Not all his temple building was welcomed. According to tradition, the local guardian deities vigorously opposed the construction of Radni (rad nis), in his birthplace. Radni contains the oldest representation of the Guhyasamaja mandala, which Rinchen Zangpo brought to Tibet. He subjugated them, and defeated their priests -- most likely the local Bon priests still in power in what was once the kingdom of Zhangzhung.

When Rinchen Zangpo was eighty-five he met Atisha at Toling. At Atisha's request he listed his accomplishments and outlined his understanding. Atisha exclaimed "If there are men like you in Tibet, then there was no need for me to come here!" But when Atisha asked him how one should practice the tantras, and Rinchen Zangpo replied that one should practice each tantra in its own way (or, more specifically, Guhyasamaja on the ground floor, Hevajra on the second floor, and Cakrasamvara on the top floor), Atisha exclaimed "Rotten translator! Indeed there was need for me to come! The tantras should all be practiced together!" Atisha then gave him instruction and told him to enter meditation retreat.

Rinchen Zangpo passed away at the age of ninety-eight in Khatse Wingir (khwa rse wing gir).

Alexander Gardner is Executive Director of the Shelley & Donald Rubin Foundation and the Director and Chief Editor of the Treasury of Lives. He completed his PhD in Buddhist Studies at the University of Michigan in 2007. Published July 2011.Bibliography:

Tucci, Giuseppe. 1988 (1932). Rin-chen bzang-po and the Renaissance of Buddhism in Tibet Around the First Millennium. New Delhi: Aditya Prakashan. 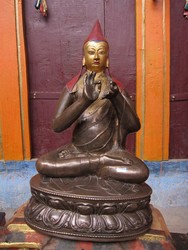 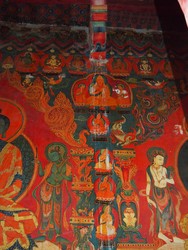 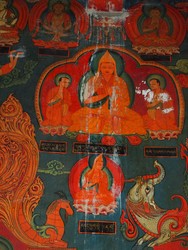 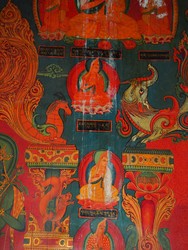 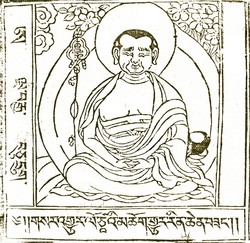