Somewhere off the coast of India there is a land know as Camara, possibly Sri Lanka, also known from ancient times as an island of demons. It is here that Padmasambhava is believed to reside and continue to teach the Dharma and make himself available to devotees - especially the 'Treasure Finders' of the Nyingma Tradition of Tibetan Buddhism. In the middle of the island is the Copper Coloured Mountain where Padmasambhava holds court within a large three-storied palace.

The principal compositional elements of the paintings are the mountain and palace containing Padmasambhava located in the center of the canvas. The mountain is surrounded by water and the land below is inhabited by numerous demons - wild and fearsome looking beings. In the sky above are peaceful deities and goddesses. Sometimes there are groups of Buddhas located at the top center of the composition, such as the Buddhas of the Three Times, the Buddhas of the Five Families, or the Thirty-five Confession Buddhas. The third floor of the palace depicts Amitabha Buddha, the second floor Avalokiteshvara and on the ground floor Padmasambhava surrounded by his eight traditional forms relating to the chronology of his life story. The three figures of Amitabha, Avalokiteshvara and Padmasambhava form an important trinity in the Nyingma religious tradition of the 'Revealed Treasures' (terma).

The real uniqueness of Copper Coloured Mountain paintings are found with the groups of deities and lineage teachers that immediately accompany Padmasambhava, in front and at the sides, located on the ground floor. These figures are not at all consistent from composition to composition. The surrounding figures change and are substituted depending first on the particular Nyingma sub-lineage relating to the donor of the religious work of art and secondly to the training and preferences of the artist.

The first painting example above is very standard in general appearance but relates specifically to a lineage of Tibetan teachers who are portrayed seated in front of Padmasambhava. A small image identified as Jatson Nyingpo (1585-1656) associates the painting with a particular tradition known as the 'Northern Treasure' lineage. Another example, HAR 90908, specifically highlights the various protector deities of the Nyingma Tradition. A third example, HAR 73414, is a depiction of the Copper Coloured Mountain as described by Choggyur Lingpa (1829-1870) and based on a personal experience of having visited the sacred mountain in a dream. All of the compositions look the same in basic appearance but are each very different with reference to the secondary figures, donor and artistic intention. (See all Copper Coloured Mountain depictions according to the vision of Chogyur Lingpa). 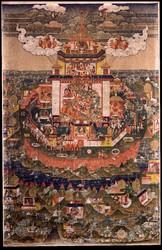 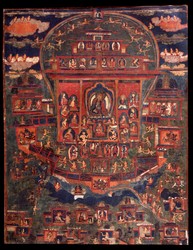 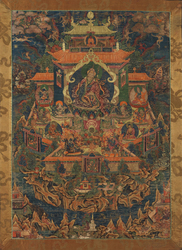 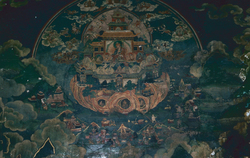 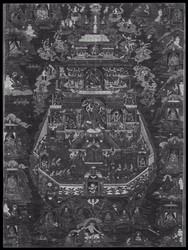 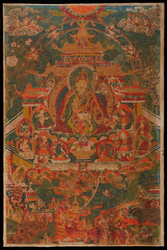 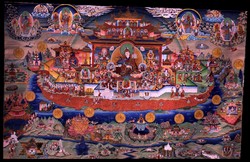 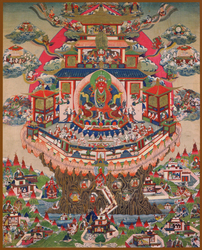 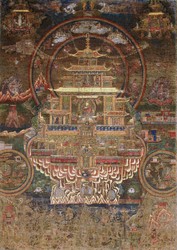 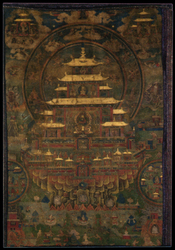 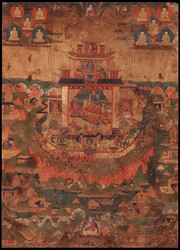 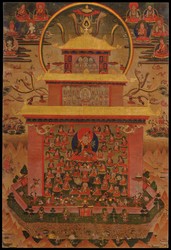