Some mandalas, generally of Hevajra, and depictions of the Eighty-four Mahasiddhas, in a few but not all cases, display a pair of hands atop a lotus or in a red circle next to head of the individual siddha. This appears to be an attribute found primarily in paintings of the Sakya tradition. This artistic consideration is rarely followed after the 14th century and completely disappears by the beginning of the 16th century, if not earlier.

Videos:
- What are Mahasiddhas: Question 1
- What is 'Mahasiddha' in Buddhist Art: Question 2

In the circle of the Eight Great Cemeteries surrounding the square central palace of the deity are eight siddhas. A standard Sakya configuration, starting at the top center is Virupa, and moving to the right is Luipa, Kukkuripa, Saraha, Indrabhuti, Dombi Heruka, Nagarjuna, and Ghantapa. In front of each of the mandala examples below is a siddha and slightly above is a red circle, or half circle, containing a pair of hands or a hand holding a skullcup. This early iconographic convention represents the direct blessings of the dakinis being received by the siddhas. (See Mandalas &the Eight Mahasiddhas).

The pair of hands symbolize that the siddha has had a direct experience with his or her personal meditational deity, or with a Tantric Buddhist dakini. Why some siddhas have the hand symbols and others do not is primarily based on the different versions of hagiography texts narrating in a brief way the important life events of each of the various siddhas. Two early noteworthy paintings are HAR #700 and #101354.

In the Vajravali Mandala painting set commissioned in honour of Lama Dampa Sonam Gyaltsen all of the semi-wrathful and wrathful mandalas that depict the eight great cemeteries have included the 'hands of the dakinis' for each of the siddhas. 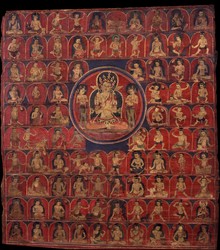 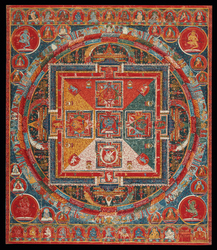 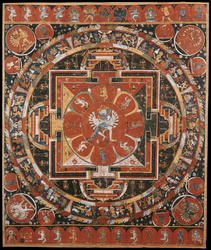 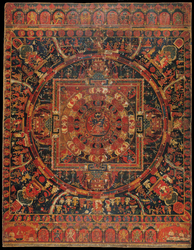 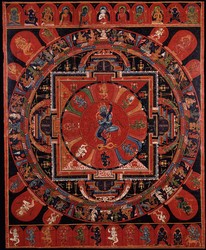 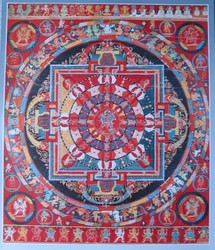 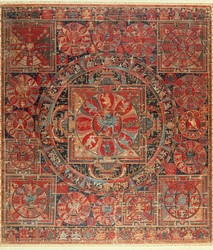 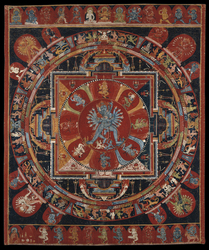 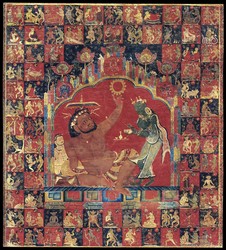