Gesar is a folk hero of Eastern Tibet and predominantly known through literature and live performance. He is believed to have lived around the 10th century. The stories of Gesar, epic in size, are brought to life through dramatic performances, song and public readings of his many adventures. It is quite possibly the longest epic poetry in the world. Despite the popularity of all of this there is relatively little found in the way of art: paintings, murals and sculpture. What objects are known are also dated very late - 19th and 20th centuries.

The earliest Gesar ritual text is believed by some scholars to be authored by Karma Pakshi (1204-1283) and is a 'sang' ritual (smoke offering), however the actual date and authorship of the text needs to be investigated very carefully by experts in the field of Gesar studies. The next documented writer is Terchen Longsal Nyingpo (1625-1692) followed by Lelung Zhepa'i Dorje (1697-1740. In the 19th century several teachers of the Nyingma tradition in East Tibet began to write religious ritual texts focusing on the form of Gesar independent of the narrative literature and popular stories. The first of these, that can be easily documented, was Do Khyentse Yeshe Dorje, (1800-1866). The second was Mipam Jamyang Namgyal Gyamtso (1846-1912), further popularized Gesar but as a Buddhist religious figure - a deity - creating rituals and meditations. A student of Mipam by the name of Ngagwang Palzang, 1879-1941 (kah thog mkhan po ngag dbang dpal bzang, dzogchen mkhan po ngag chung), created an Arrow Divination system (Gesar Dadar) with a one month required retreat.

A scholar from Dzogchen Monastery, Kyabje Pema Kalsang Rinpoche (1943-1979), wrote the elaborate explanation on how to perform the Gesar Cham - dance performance. In the colophon of the text it states that he relied on the great writings of the previous scholars. Eight of the central figures in the Sichuan Museum Gesar Life Story painting set depict the Ling Lha Gye - the Eight Gods of Ling (Gesar) - an important section of the dance performance. During the dance each of these gods are depicted with elaborate costumes and masks.

In the 19th and 20th centuries a number of other teachers such as Nyala Pema Dudul (1816-1872 [w23695]) a student of Do Khyentse, Terdag Lingpa, the 14th Karmapa Tegchog Dorje (1799-1869), Jamgon Kongtrul Lodro Taye (1813-1899), Dasal Wangmo, Tubten Tsondru (1920-1979), and others wrote ritual texts and smoke offering prayers (sang chod). Dasal Wangmo of the early to mid 20th century wrote many Gesar related texts both ritual, history and biography. Regardless of the different authors and ritual texts, most of the art objects that are currently known appear to be related or inspired by the writings of Do Khyentse or Mipam.

There are two sets of early Gesar life story paintings known to exist: Le Guimet in Paris with 2 paintings and Sichuan Provincial Museum with 11 paintings. The Guimet set was first recorded in France in 1904 and acquired by the museum sometime after that. The Sichuan Museum set was acquired approximately in the mid part of the last century. The two sets are almost identical and obviously copies one from the other or from another third copy of the same composition. It is not yet determined which is the earlier of the two sets or whether they were both copied from another even earlier (3rd) master set. However both sets can be safely dated to prior to 1904.

The central subject of the single composition (from a set of paintings) of the Rubin Museum painting is of the uncle of Gesar, Aku Trotung, and obviously from a larger set likely depicting all of the thirty generals in Gesar's retinue. Upon initial investigation it was not clear if this painting might also be from a life story set of paintings. Aside from the images depicted on HAR there is a single painting depicting Gesar and the eight retinue generals in the collection of the Sichuan University and another two in a private collection in Chengdu. At least two sculpture of Gesar are also known. Both are of the same subject - a peaceful figure, wearing a tall cylindrical hat, seated on a cushion with one leg extended. The block print images (parma) appear to be from the Dege Printing House (parkhang) in East Tibet and said to be from the early 19th century. There are many modern Gesar images in painting and sculpture. Undoubtedly more objects with a slightly less than modern provenance will be located in other collections - institution or private.

The general depiction of Gesar is of a Tibetan warrior, atop a horse, clad in armor and a helmet with elaborate flag pennants and streamers, accompanied by eight horseman upto thirty horsemen. Gesar is also commonly depicted with thirteen animals surrounding him. These are the 'Werma Chu Sum' - thirteen special attendant figures - animals.

This general description of Gesar Norbu Dradul is almost identical to that of any typical Drala (or Dra lha, 'Enemy God'). Drala Appearance is one of eleven principal appearance types in Tibetan iconography. It is very easy to confuse the two subjects of Gesar and other Drala figures such as the Drala Chegu since Gesar appears to be so entirely related to the subject of the Drala and Werma. Also look at another similar figure (HAR #73433) which is not yet identified. (See the Drala Appearance Outline Page and a Gesar-Drala Comparison Page). 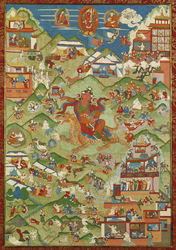 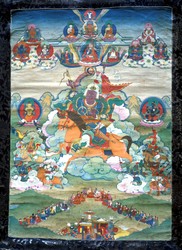 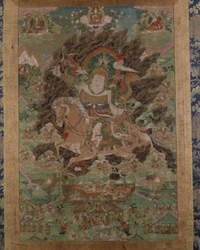