The Bon religion has one principal hat which is worn by monastic figures who are educated and fully ordained. The name given is lotus hat the same name as the lotus hat of the Nyingma Buddhists but with a different appearance. It is somewhat of a cross between the lotus hat style and the cap style hat.

In painting and sculpture the hat is round with three, five or eight petals which are red orange or yellow in colour. The top is blue and adorned on the crown with an ornament. There are numerous other hats but they are not commonly depicted in art or easily identified because of their rarity. Recognizing the Bon lotus hat is key iconographic tool in distinguishing Bon deity paintings from Buddhist deity paintings. Examples of the hat are most commonly seen with Nyamme Sherab Gyaltsen (1356-1415) and depicted in Bon Refuge Field paintings.

Some of the varied hats can be white with blue ribbons, fur hats made of tiger skin, or black and marked with a yungdrung. The yungdrung, left turning and the principal symbol of the Bon religion, is occasionally emblazoned on the front of a cap style hat (see example).

There are several examples of hybrid Bon/Buddhist hats. These hats are the product of Bon 'Sarma' also known as 'New' Bon. This tradition merges and adopts many Buddhist practices into the Bon religion and most closely resembles the Nyingma tradition of the Buddhists. The hybrid hats often have both a yungdrung Bon symbol and a half-vajra Buddhist symbol (see example). 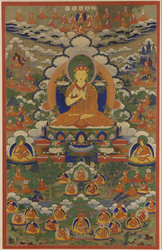 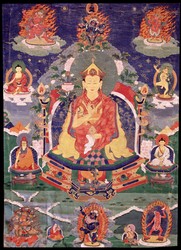 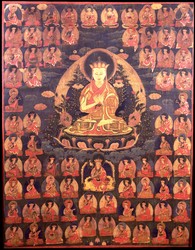